Samsung has announced that it will host its much-awaited Galaxy Unpacked event on 11 August. The event will kick off at 7.30 pm IST and the livestream link will be available on Samsung Newsroom India and Samsung.com. In the e-invite, the company has teased, “Get ready to unfold”, hinting that it is planning to launch foldable smartphones at the event. Although the company has not revealed the name of the devices that will be launched at the event, as per the previous reports, the tech giant is expected to launch Galaxy Z Flip 3, Galaxy Z Fold 3, Galaxy Watch 4, and Galaxy Buds 2 during the event. 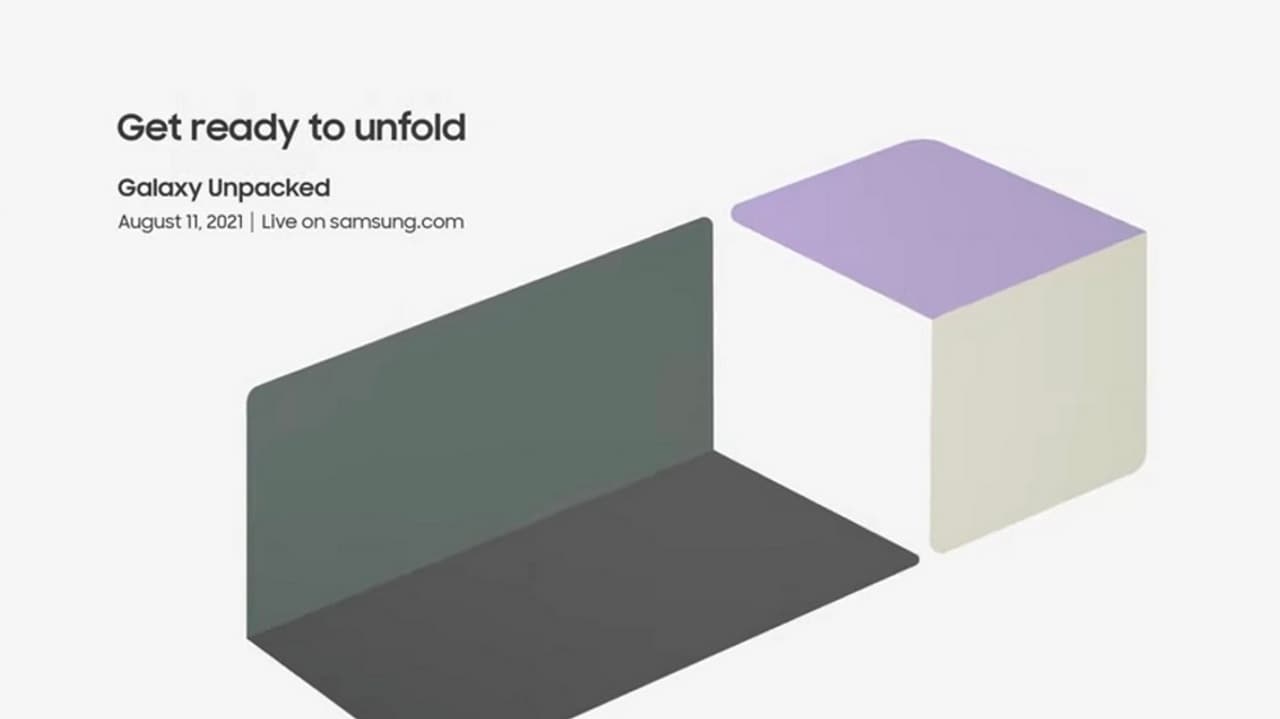 Samsung Galaxy Unpacked event will kick off at 7.30 pm IST on 11 August.

Ready to go from good to great? Join us as we unfold the latest Galaxy experience.

As per the Galaxy Z Flip 3 spotted on Geekbench with model number SM-F7110U, it is expected to be powered by Snapdragon 888 chipset and8 GB RAM. According to a report by GSMArena, it might come with a 3,300 mAh battery that supports 25 W wired and 15 W wireless charging. It is expected to come with a 1.9-inch external display. The primary 6.7-inch display is likely to come with a 120 Hz refresh rate.

The foldable smartphone is also expected to be 20 percent cheaper than its predecessor, reported SamMobile.

As for Galaxy Fold 3, a GSMArena report suggests that it might come with two 6.23-inch and 7.55-inch Super AMOLED displays. It might also come with S Pen support. In addition to this, it is likely to be powered by Snapdragon 888 chipset and might offer up to 12 GB RAM. It is expected to run on Android 11.

In terms of camera, it is likely to feature a triple rear camera setup that houses three 12 MP sensors that include ultrawide angle lens with autofocus. It might come with a 16 M under-display front camera and a 10 MP camera on the cover display.

A report by Github reveals that Samsung Galaxy Buds 2 might come with five colour options including black, white, gray/green, violet, and yellow. The earbuds will also come with Active Noise Cancellation (ANC). The report further suggests that each earbud will come with a 61 mAh battery and the case will have a 472 mAh battery that is similar to Buds Pro that offers up to 28 hours of battery life.

Going by a report by 91Mobiles, Galaxy Watch4 might come in 40 mm and 44 mm size variants. It is likely to come with 5 ATM water resistance and Gorilla Glass DX+ protection. The report also shares a few renders of the Galaxy Watch 4. As per the renders, the smartwatch might come with a circular dial that sports two physical buttons on the right side. It might also come with a touch-sensitive bezel. In terms of colours, it is likely to come in white, green, black, red, and yellow with a silver, black, or mystic bronze watch body.

Since Samsung and Google have announced to merge their  Tizen OS and Google Wear OS to launch a new unified OS. The upcoming smartwatch will be the first watch to come with the new OS.