For students on a tight budget, it holds some value- Technology News, Firstpost

I’ve always felt that ChromeOS is a platform from a bygone era. An OS designed for the terrible Intel Atom-powered Netbook days, from an era when budget laptops lacked the grunt to do anything other than exist. But this was sometime in 2011-12, when Chrome was good but not great, when Windows Phone was a thing, and when broadband meant 1 Mbps speeds.

Nearly a decade later, in a world bathed in 4G, I now have the chance to experience a faster, more modern ChromeOS. We now have apps to play with, faster, more efficient processors to run on, and a much more refined, touch-friendly UI. There’s even support for certain Linux applications. A lot has changed, but surprisingly, a lot hasn’t. 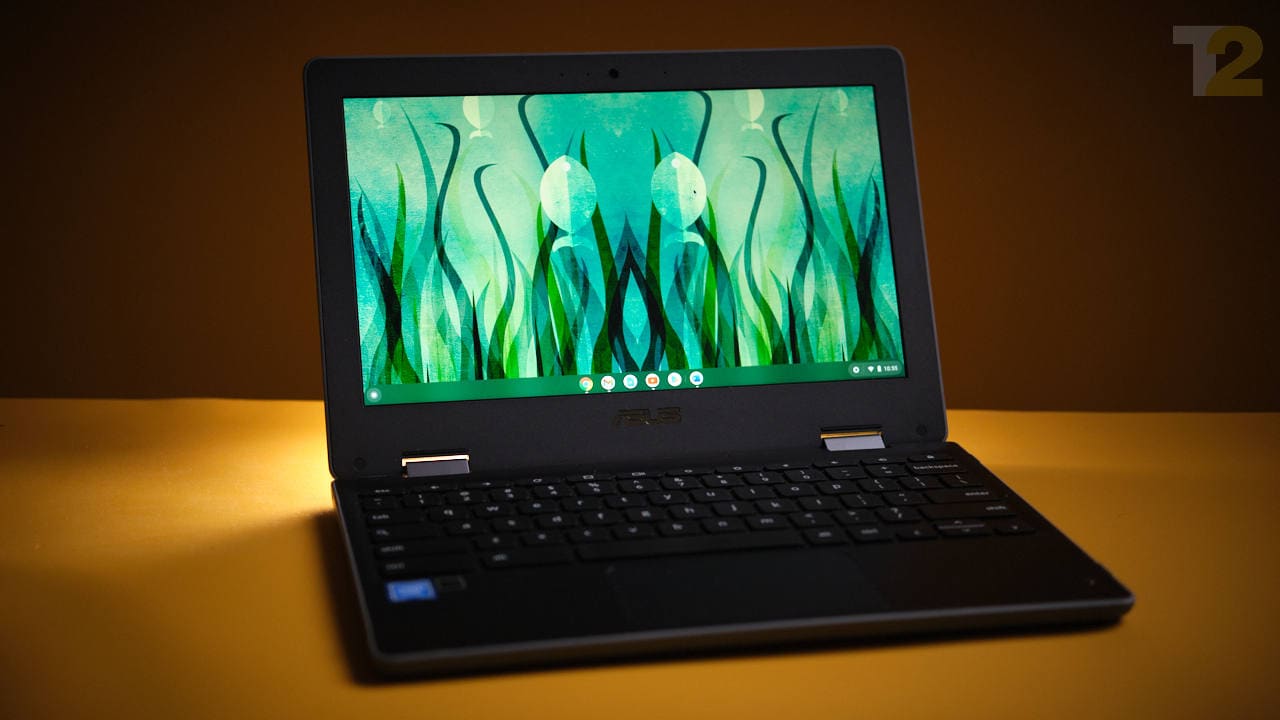 The Chromebook Flip C214 isn’t much of a looker, but it’s designed for abuse and built like a tank. I just wish that the display wasn’t so deeply recessed because it interferes with touch input near the edges. Image: Anirudh Regidi

What is a Chromebook?

A Chromebook is a laptop that runs ChromeOS. ChromeOS is an operating system, like Windows or macOS, but designed by Google and focused almost exclusively on the Chrome browser. You’re expected to work in the cloud and, primarily, to use Google’s suite of admittedly powerful web apps. In 2011, with plodding internet speeds and no cellular data to speak of, this was a problem. In 2021, it’s not.

As an overall experience, ChromeOS isn’t too bad. The Chromebook I’m using is the Flip C214 from Asus. It’s a budget, student-focused device that’s powered by a Celeron N4020 processor and 4 GB of RAM. There’s 64 GB of internal eMMC storage that’s expandable via microSD, a couple of 5 Gbps USB-C ports that support charging and DisplayPort, a USB-A port, dual-band Wi-Fi and Bluetooth 5.0 support, and an 11.6-inch HD+ flip screen with touch input and stylus support. For a Windows-powered PC, these specs would be laughable. For ChromeOS, they’re a decent baseline.

With internet connectivity not being an issue, and most of my work having long since shifted to the cloud, working in ChromeOS was a non-issue. Web apps like Gmail, Docs, and Sheets open quickly and respond well, and with powerful web-only image editing apps like PhotoPea and Adobe Spark taking care of my editing needs, one of my long-standing complaints with web-based OSes has been addressed.

The file manager is quite powerful and better than the awful Files app in iPadOS. It even recognises the NTFS file system and most files open without issue. While not all video formats are supported by default, you can easily use a player like VLC.

Performance on the C214 is a bit of a mixed bag.

While the UI is snappy and you can quickly switch between apps and tabs, there’s a sluggishness to the system that’s… weird. It’s like the OS wants to do your bidding as fast as possible, but hesitates a beat every time it has to. This is especially noticeable on YouTube.

Double-tap a YouTube window to take it full-screen and you’ll see the window expand instantly. At the same time, it’ll remain black while the audio plays in the background. Half a second later, the video snaps into place. Fast-forward a video by double-tapping the side and you’ll see the fast-forward UI animation instantly, but the video won’t catch up till half a second later.

Essentially, it seems like the UI responds instantly, but everything else needs time to catch up. When performing several tasks simultaneously, it sometimes feels like you’re queueing up commands rather than enjoying a real-time computing experience.

Like I said, it’s a weird kind of sluggishness and I suspect a wimpy GPU to be the culprit here. Perhaps more powerful hardware than what the C214 is packing will offer a smoother experience.

And then there are some quirks. When using an Android app like Word, typing is fast and smooth, but make text bold and you won’t see the effect till you go to the next line. The window doesn’t follow the cursor, which also tends to vanish at times, text gets weird lines through it, and so on. Google Docs works well, however.

Could I live with ChromeOS? Definitely. Would I want to? No.

Here’s the thing: I don’t mind ChromeOS, but I don’t think it’s evolved at the same rate that PC hardware, Windows 10, and macOS have. It’s an OS that still feels like it was made a decade ago. There’s a distinct lack of refinement, a quirkiness that’s more irritating than charming, and a lack of flexibility that feels like a hindrance.

Coming to the hardware itself, with the Asus C214 Chromebook, I’m again in two minds about the device. It’s designed for young students and the focus is on ruggedness, repairability, and ease of use. To that end, Asus has succeeded. The Chromebook feels very rugged and this is one of the few laptops I’d be comfortable tossing onto a bed from 5 feet away. The hinge is very sturdy, there’s no flex to the chassis and the cheap-feeling plastic certainly doesn’t scratch easy.

The display, while lacking in the colour department, scores on contrast, allowing text to stand out. Battery life is rated at 11 hrs and I found the device easily getting me through two workdays of heavy use. The keyboard isn’t backlit, but the keys have a rough, grippy texture, index well, and are nice enough to type on. My only real complaint are the speakers, which are only useful in quiet rooms, and for certain TV shows, even that won’t do.

Overall, the C214 is a decent device and it seems like a great option for young students and for school use. But then there’s the price, and ChromeOS’ limitations as a learning platform.

In my mind, I see two issues, with Chromebooks in general and the C214 in particular.

First, there’s the obvious one: ChromeOS. ChromeOS is great if you live on the web, but as a learning platform, I think it falls short. I don’t believe that ChromeOS can grow and evolve as your kid’s computing needs grow and evolve. If your kid has any interest in computers, they’ll outgrow the Chromebook in no time at all, and the C214, unlike an iPad, can’t double-up as an entertainment hub when it’s usefulness as a glorified browser has expired.

Second, there’s the price. The C214’s pricing (Rs 24k) puts it within striking distance of Apple’s entry-level iPad (27k). The iPad, while it’s missing a keyboard, basically does everything the C214 can, and does it better, and in a better built, better-looking package at that. If you want web apps, you have Safari and Chrome, and at the same time, you get a superior app ecosystem to explore, a better display, a better designed, more responsive UI, a powerful speaker, faster storage, and more. Getting a rugged case and keyboard will push the price over the 30k mark, however.

You could also spend a smidge over 30k and get the power and flexibility of a real desktop OS like Windows 10 in a laptop powered by a powerful, 10th Gen Intel Core CPU or 3rd Gen AMD Ryzen APU.

On a budget, and as a student-only device, there’s certainly an argument to be made for the C214, but I think it’s worth digging a little deeper and spending a little more on either an iPad or a laptop if you’re looking for long-term value.