NASA has released a video of its space probe Juno flying across Jupiter and its largest moon, Ganymede. The video is enthraling as it is from the point of view of the spacecraft. This video was taken on 7 June 2021 when Juno flew past the icy giant and its moon Ganymede, closer than any other spacecraft had in more than two decades. 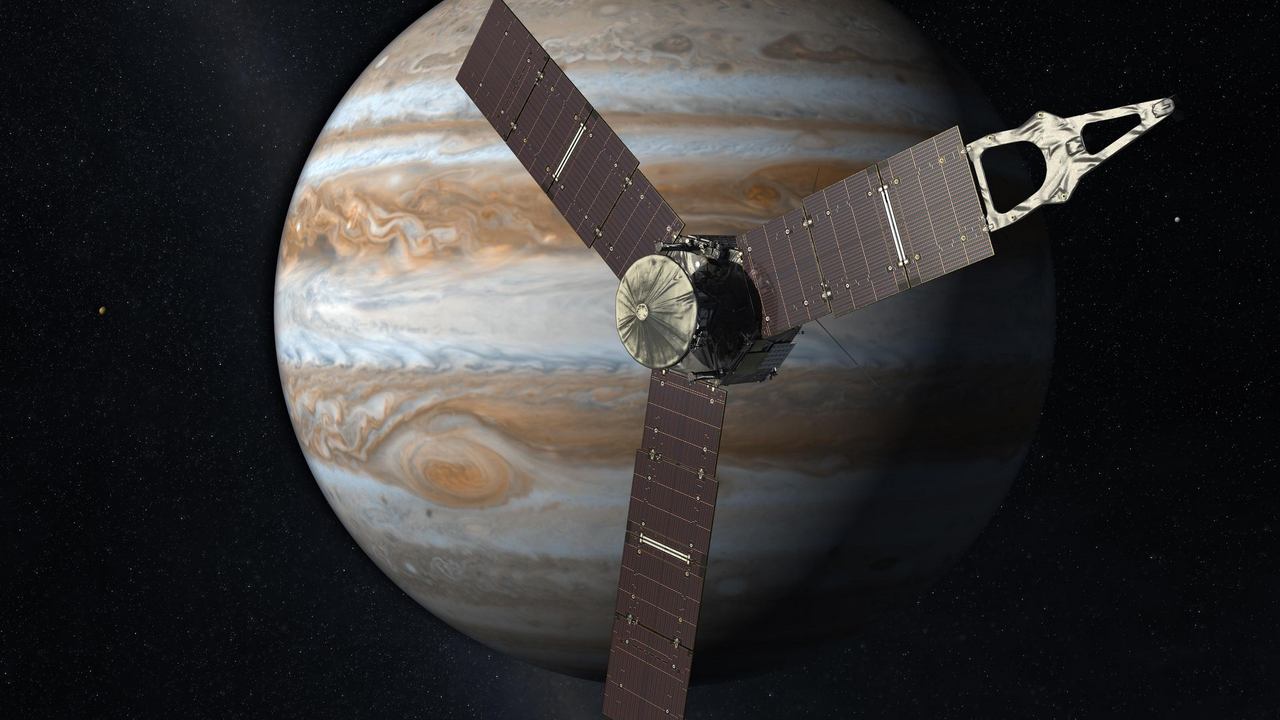 The 3:30-minute-long video begins with Juno approaching Ganymede. The spacecraft flew within 1,038 kilometres of the moon’s surface at a relative velocity of 67,000 kph.

Then spacecraft flew a little less than 15 hours to reach Jupiter which is around 1.18 million kilometres away. Once there, the viewer is a mere 3,400 kilometres above Jupiter’s spectacular cloud tops

Commenting on the video, Scott Bolton, principal investigator of Juno from the Southwest Research Institute in San Antonio said “The animation shows just how beautiful deep space exploration can be.”

He also that this animated video is a way for people to explore “our solar system firsthand by seeing what it would be like to be orbiting Jupiter and flying past one of its icy moons.”

As the space probe flies past the surface, we could see it capturing the cratered surface of Jupiter’s moon. According to a Space.com report, Tros can be seen in the footage. One can see several of the moon’s dark and light regions states NASA. The darker regions are believed to result from ice sublimating into the surrounding vacuum, leaving behind darkened residue.

Tros is the largest and the brightest crater of Ganymede and is surrounded by the white rays of ejected material.

After Juno captured the images of Ganymede’s surface, the probe took pictures of the surface of Jupiter. Lightning could also be seen in the video in the form of flashes of white light. The white ovals on its surface indicate a set of giant storms. These are known as the ‘string of pearls’ and can be seen in the southern hemisphere of Jupiter.

The video footage that has been released by NASA was compiled by citizen scientist Gerald Eichstädt. The team of Juno used the imagery that the JunoCam imager captured in order to prepare this video.

The team and Eichstädt used images clicked by Juno during its closest approach to Ganymede and of its 34th flyby of Jupiter that happened last week. Eichstädt has prepared a time-lapse video that allows the user to witness how Juno moves around while capturing images of Jupiter and Ganymede.

While Eichstädt’s video is only three and a half minutes in duration, Juno spent about 18 hours in total travelling between the planet and is moon and the poles of the planet.