Jeep has now revealed the first interior details of its new three-row SUV planned for an India launch in early-2022. The car is expected to go by the Jeep Commander name in some markets, but Jeep seems to have homed in on the Meridian nameplate for India, having recently trademarked this name. The Jeep Meridian is a derivative of the Compass and is expected to be based around an extended version of its architecture. A set of new teasers from Jeep show that the Jeep Meridian will carry forward the same interior layout as the facelifted Jeep Compass. However, the materials and themes used will differ significantly. The pictures show the leather dash face being replaced by a suede one in the Meridian, while a brushed chrome finish spread across the dash in the Compass seems to have been replaced by rose gold highlights. This colour choice is also seen on the door handles and centre console. Another notable change is a new steering wheel, and the tan seat upholstery featuring a quilted pattern. Also seen is open-pore wood trim along the dash and on the door panels; a nice touch is the Jeep 1941 stamping on the centre armrest. A peek at the third row of the Jeep Meridian. Image: Jeep

Some feature highlights visible are ADAS controls on the steering wheel, although these aren’t likely to be seen in India. There is a panoramic sunroof as well as separate climate zones for the second row. Also visible is what looks like a large foldable second-row centre armrest, for quick conversion to a six-seater layout. Expect a separate AC blower for the last row too, as well as USB ports for all passengers. 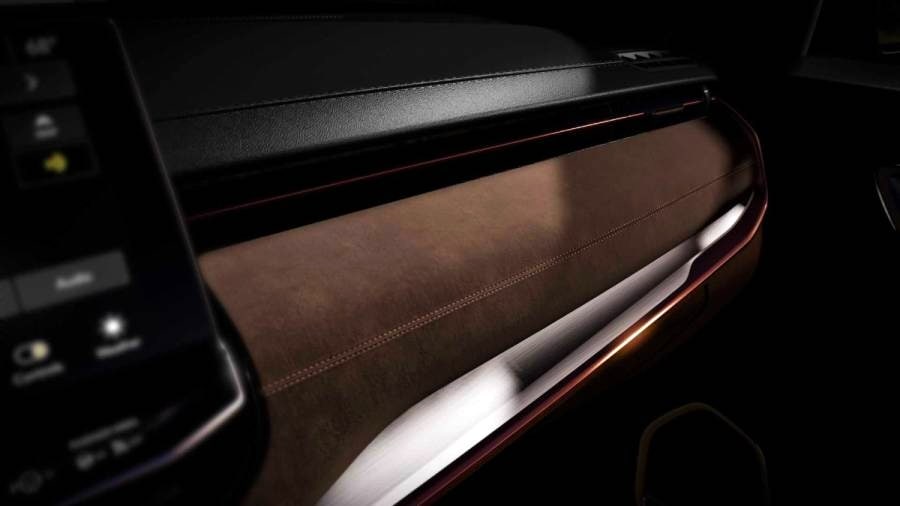 Jeep will employ a mix of different colours and materials for the Meridian’s interior. Image: Jeep

The seven-seater Jeep Meridian looks to follow the theme set by the test mules and teaser we’ve already seen. The face is heavily inspired by Jeep’s newest offerings like the new-gen Grand Cherokee and the Grand Wagoneer. There is the same blocky look with the flat, faux seven-slat grille and the squared-off LED headlamps. The high bonnet line and large air intake, seen on the facelifted Compass, are here as well but in a different arrangement. The Grand Commander has a more upright shape to accommodate the longer wheelbase and rear overhang. The typically bulged and squared Jeep wheel arches are seen here as well. At the rear, there is a distinct single piece LED taillamp, again inspired by the Jeep flagships as well as a flat boot lid and large badging. Many different themes are expected for the grille and bumper highlights dependent on the variant chosen.

The seven-seater Jeep should get the same engine choices as the Compass. The Jeep Compass is powered by a 1.4-litre petrol engine that makes 162 hp of power and 250 Nm of torque. A 2.0-litre diesel engine is also available that puts out 173 hp of power and 350 Nm of torque, coupled with a nine-speed automatic transmission or a six-speed manual, this engine may be available in a higher tune in the larger SUV. The petrol gets a seven-speed DCT. The AWD system with many off-road modes, a hill-descent function and Low range mode should be seen here as well.

The new Jeep seven-seater SUV is expected to launch in India in early 2022 and will go up against the likes of the Ford Endeavour and Toyota Fortuner, with prices at a Rs 1.5 to 2 lakh premium over the Compass. The new SUV, codenamed the H6, will be the third of four models that Jeep has planned for the Indian market, following the facelifted Jeep Compass and the locally-assembled Jeep Wrangler.