Your friend is fresh off the boat, and has moved to Mumbai to realise his dreams. You wonder how the heck he has managed to land a plum job in this market, and make a mental note to pry for opportunities. In the meantime, you have him over for drinks and whatever you can cook up in your pitch-black, cast-iron skillet that lockdown YouTube insisted you must have. Ready-to-fry cutlets it will be, but cooked with care and craftsmanship.

You’re quite proud of your three-BHK home that is sparsely (but tastefully) decorated. You casually show him around, trying not to flex much. He smiles, makes the right impressed noises and you both return to your drinks. Your friend is from the NCR region. You’re in Goregaon. His toilet is the size of your living room. And yet, he acts impressed. This is true friendship. The Hyundai Alcazar is the latest in a line of three-row SUVs launched in India. Image: Hyundai

I painted this picture because much like Mumbai three-BHKs, most three-row SUVs in India are only just enough to technically qualify as seven-seaters. Our bedrooms barely fit a queen-size and custom cabinets, and seven-seat SUVs just about fit a couple of pre-teen kids in the third row. This applies to the new Hyundai Alcazar, as well as its direct competition – the Tata Safari and MG Hector Plus. However, if you don’t really need those extra bedrooms, a three-BHK with tiny rooms still gives one some space to stretch their legs.

The Alcazar is a Creta ++

The Hyundai Creta is pure gold for the Korean manufacturer. It’s the default choice for anyone in the 15-odd lakh segment, since SUVs are on trend and sedans are increasingly rare. There’s plenty of action below this segment as well, with a plethora of sub-four-metre compact SUVs available, as well as more recent entries into the seven-seater space in the form of the Safari and Hector Plus. If you love the Creta but wished for more seats or space for the odd road trip, the Alcazar is definitely for you.
While it’s based on the same platform, the Alcazar outdoes the Creta in most dimensions, and certainly in luxury and amenities. It’s longer, taller, has a third row of seats, more ground clearance, and is available as a six- or seven-seater. We tested the 2.0-litre petrol with a six-speed automatic transmission. The Alcazar is pretty spacious on the inside, and is well put together. Image: Hyundai

Our test car came with a dual-tone ‘cognac-beige’ colour scheme, where the top of the dash was a colour somewhere between a burgundy and rust, that Hyundai calls by the name of the spirit. The first impression hits the spot, and the interior looks luxe. Things feel taut and well put-together, the cabin feels airy and spacious, with the added volume being evident. This author is lighter than most potential buyers, so the seats were both generous and comfortable, and the driver’s side has power adjustment. The front seats are also ventilated, which Hyundai has been known for in its other cars as well. 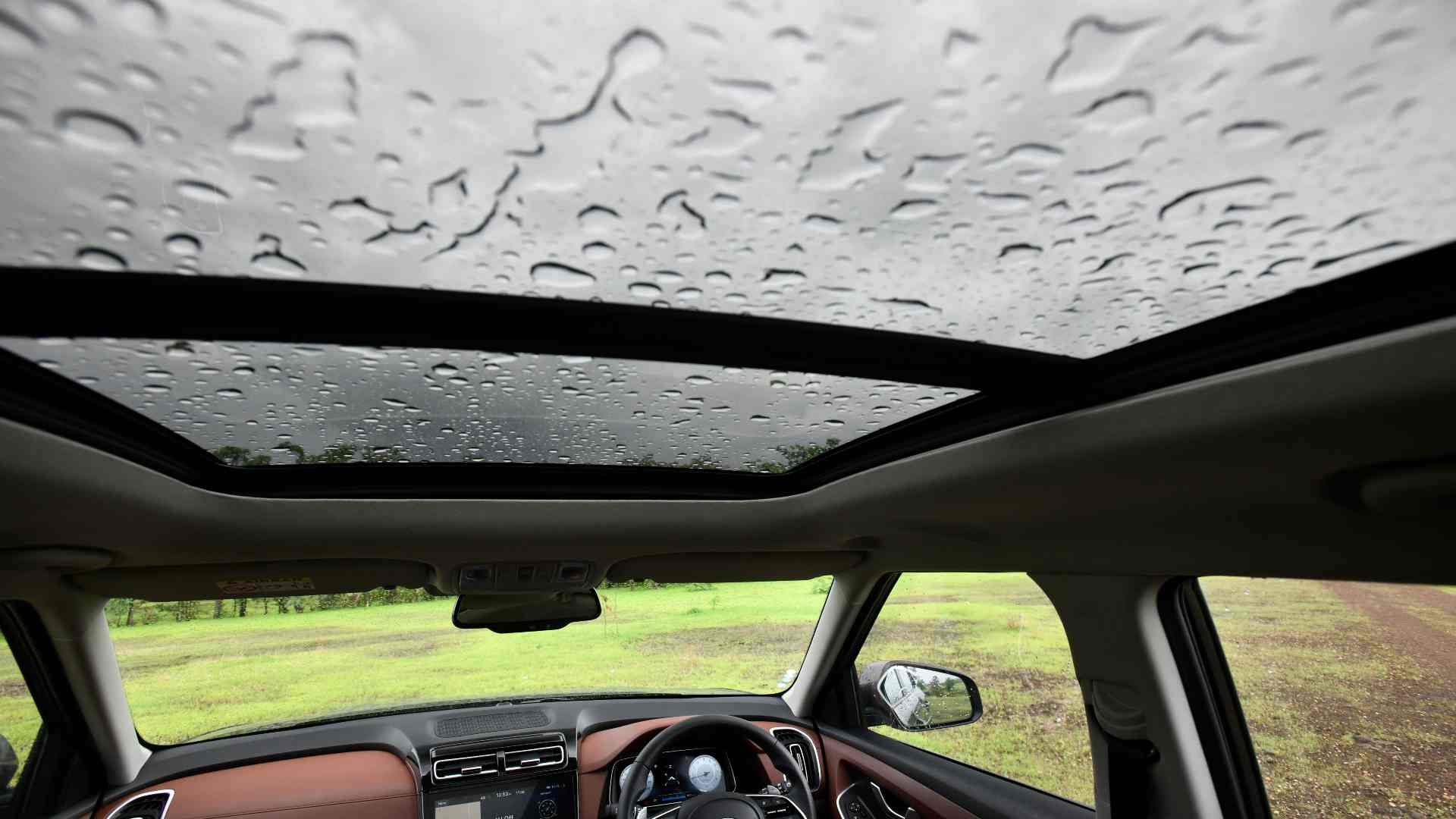 Full-size panoramic sunroof adds to the feeling of airiness inside the Alcazar. Image: Hyundai

The equipment list only gets more impressive from here on. There’s an air purifier with a convenient LCD screen on the centre console. There’s an excellent wireless charger up front, with one in the second row as well (with the six-seat version). A panoramic sunroof is on offer, and the glove box is cooled. It’s the several little touches that add up to the feeling of a truly well-appointed car.

The second row is quite impressive. There’s a tremendous amount of legroom for second-row passengers, with the two captain seats – which both recline, and slide – each getting its own little foldable tray, complete with a slot for your devices. There’s a cavernous centre console with storage and a wireless charger and, of course, cup holders. Manual sunshades are also available for rear passengers. The chauffeur-driven will appreciate all the second row of the Alcazar has to offer. Image: Hyundai

This combination of thoughtful amenities and an extended wheelbase is best experienced in the second row of the Alcazar. I’d imagine that as a chauffeured vehicle, the Alcazar would prove to be an excellent executive SUV. Especially in the six-seat variant we sampled, it’s an excellent space to relax, or get some work done in a quiet setting. Taller occupants will also appreciate the knee room, and we had no problem accommodating six-footers behind my 5’9” driving position. Thanks to the 200mm ground clearance (unladen), this is an excellent vehicle to traverse the Mumbai monsoon commute without having to get off your Zoom call. 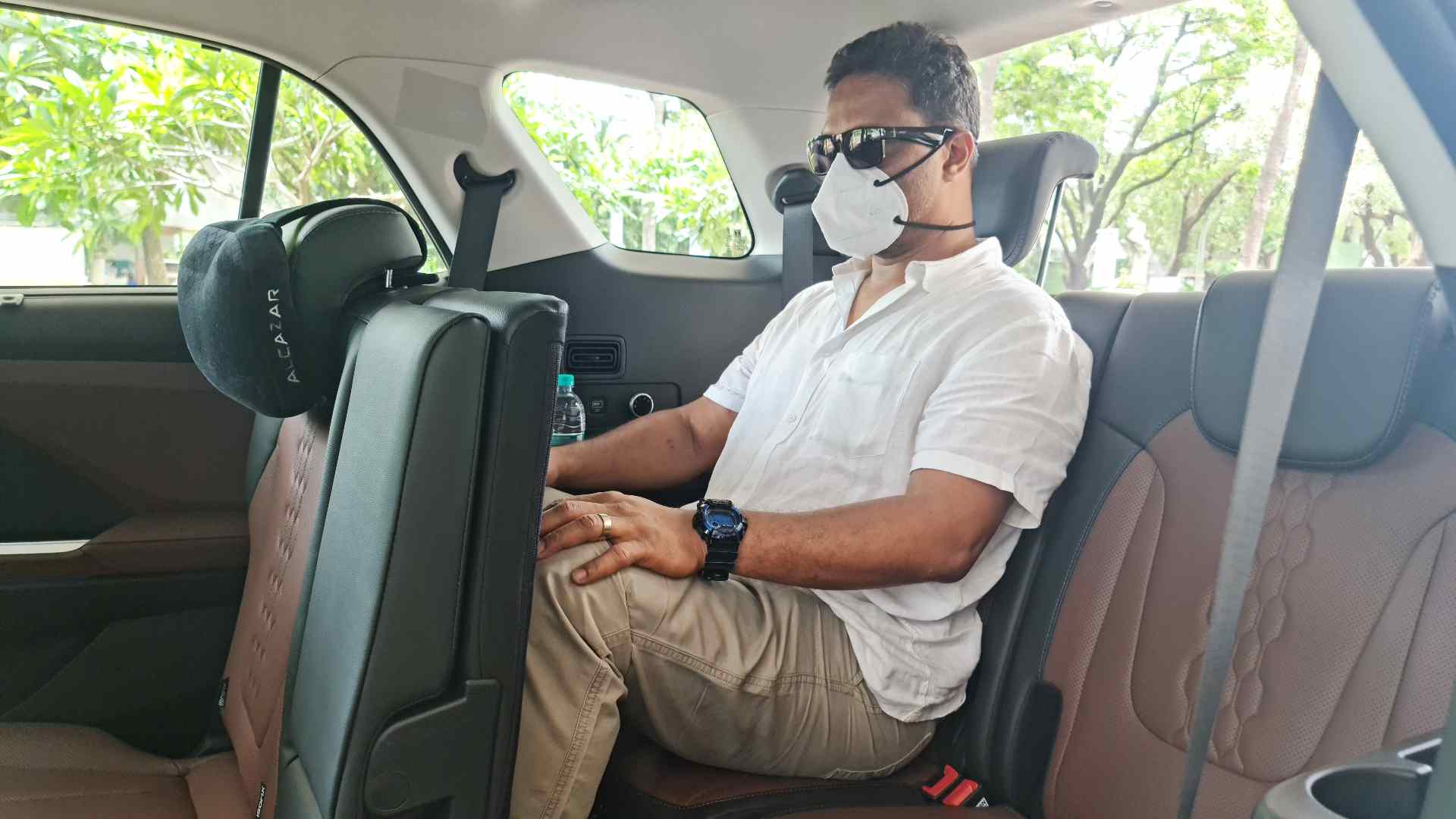 Unsurprisingly, the third row of the Alcazar is best left to kids. Image: Hyundai

And finally, the third row is, well, there. It’s not a great place to be seated for long durations. Legroom is cramped, but can be freed up if the second-row passengers are willing to slide their seat forward. Access is rather easy, with a one-touch flip/tumble for the second-row seats, making ingress and egress for the third row convenient.

About the only nit-pick I can remember from my brief time with the Alcazar was the plastic quality did not match the good vibes of the rest of the car. It is a bigger Creta, but the Alcazar has enough changes on the outside to differentiate itself. Image: Hyundai

We will let the pictures speak for themselves. The Alcazar is, to my eyes, a well-proportioned and solid looking vehicle. The dimensions are considerably different from the Creta’s, and it stands on its own in terms of design. The use of dark chrome differentiates it from its rivals, and the two-tone ‘diamond-cut’ wheels are overt, but nice. The front and side profiles will feel familiar to Creta observers, but I’m happy to note it does not look like they just tacked on a third row.

A word about tech

In the past, we’ve observed that despite not making as much noise about it as its competition, Hyundai actually has a solid, feature-packed infotainment and connected car suite. This carries forward with the Alcazar, with a large 10.25-inch central screen, as well as a 10.25-inch full-digital TFT instruments display in the driver binnacle. Both are high resolution and easy to read, and the touchscreen was fluid and responsive. Hyundai calls its connected car suite ‘BlueLink’, and it has an impressive number of features. It does, however, present them in a cluttered way on the touchscreen itself. There are just too many icons. We did not test the companion app. There are also three quick access buttons on the rear-view mirror to send out an SOS alert, call for roadside assistance or just talk to the concierge service. Hyundai’s agents can, for instance, find something for you and send it directly to your Alcazar’s navigation system. Speaking of which, this is one of the few onboard nav systems I’ve seen that is not impossibly slow and janky. It appears smooth and fluid to the touch. I was disappointed by the lack of wireless Apple CarPlay; I needed to connect the phone via cable for that. This makes the wireless charger less useful and the experience, in general, less smooth. Once connected, however, my smartphone worked flawlessly, and the wireless charger was consistent.
The Alcazar variant we drove came equipped with a 360-degree camera, which is useful when parking in tight spots. It also doubles as a blind spot camera that gives you an extra view right in the digital instruments display when you activate the turn indicator. It’s a neat touch that will take some getting used to, but anything that enhances safety is a good thing in my book.

On the go: serene, confident, luxurious

We only had the chance to sample the 2.0-litre petrol motor mated to the six-speed automatic transmission. The motor makes 159 hp and 191Nm of torque, which – for this size and intent of vehicle – seems to fall short. With two or three occupants at city speeds, I’m happy to say that I was more than satisfied, but I wonder what highway stints with a full load would be like. 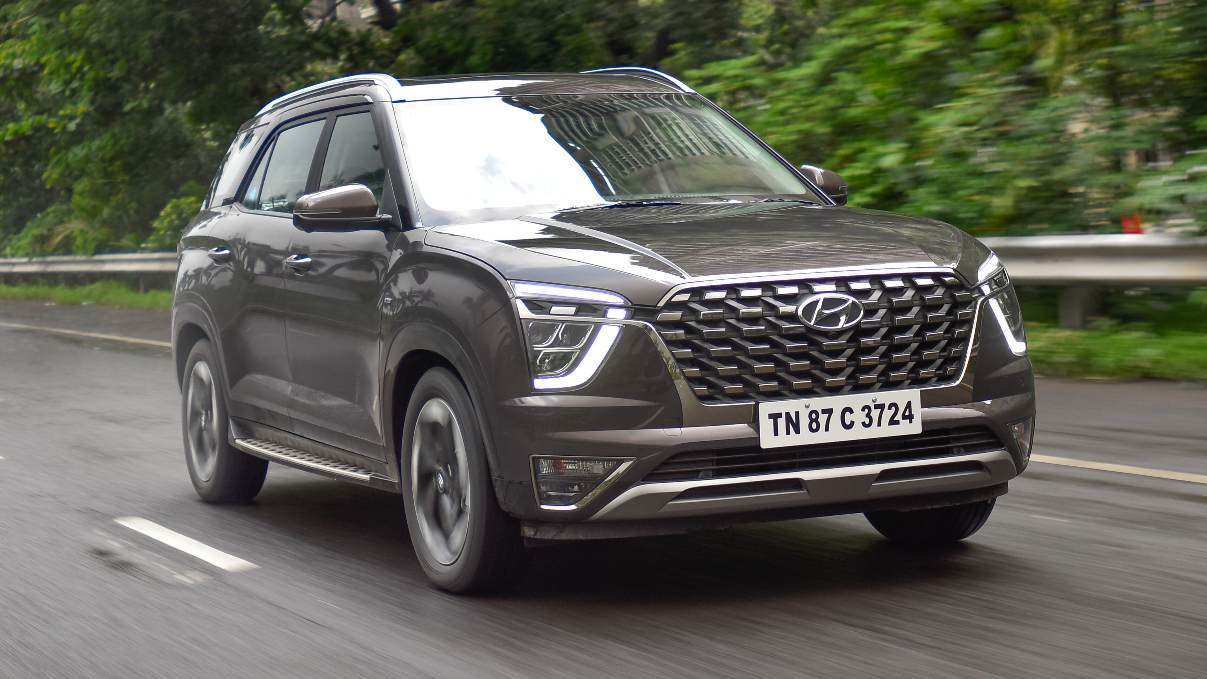 The pairing of the naturally-aspirated 2.0-litre petrol engine and six-speed automatic transmission is sublime. Shifts are seamless, and noise and vibrations are very well controlled. This contributes to a serene, quiet cabin. Combined with the excellent air conditioning, general visibility and plenty of light from the panoramic sunroof, one feels fresh and alert in the cabin and there’s a general feeling of space, even though this vehicle isn’t wider than a Creta.

I would consider 191 Nm just north of acceptable for this size of vehicle, but the transmission makes good use of it. Our drive was exclusively on crowded city roads, as well as over some stretches that could be considered off-road. The Alcazar was not point-and-shoot zippy, but it moves with authority when needed, at least when lightly loaded. Power figures are acceptable, and I expect it to be an easy inter-city tourer once on the highway. The Alcazar’s ride is pliant, but not mushy. Image: Hyundai

Suspension is plush but not mushy, and I think this is a good compromise for a slightly older buyer who leans toward comfort, convenience and space. Thanks to the relatively narrow body, the Alcazar was never difficult to place, and the turning radius is also small enough to be convenient when making U-turns.

There are three drive and three terrain modes available; the drive modes did not seem to make big changes to the performance of the SUV. I imagine this is down to the modest state of tune of the engine.

The Alcazar struck me as a very, very agreeable vehicle. As a buyer, one may not use the third row very much, but the added length allows for so much flexibility – second-row passengers really get to stretch out, and cargo room is aplenty. Performance is not punchy and will not appeal immediately to enthusiasts, but I suspect the package will win hearts. The Alcazar picks the right boxes to tick, and leaves out a few you might forgive. And at the very top end, it costs Rs 19.99 lakh, which – I think – is an excellent deal considering the competition. Plus, it has a diesel option which, I suspect, will be the better performer. Certainly, salespersons for the recently-launched Skoda Kushaq are going to have a hard time keeping customers from looking across the glass doors at the Hyundai showroom.