I must confess, the Skoda Kushaq did not impress me when I first saw it at the world premiere in March. Among the throngs, it looked tiny, with bland styling, and my few minutes in the back seat did not inspire any wonder. Thankfully, heading out for a spin in the production-spec Kushaq changed my perception over the day that I drove it around the city. The Skoda Kushaq looks smart, but is clearly smaller than some of its rivals. Image: Overdrive/Anis Shaikh

The Kushaq is a Creta-fighter

This is what Skoda believes the Kushaq is, and has positioned it as such. But it is quite evident even at first glance that the Kushaq is smaller than the Creta. Not by much in numbers, but the size difference is perceptible. It’s more palpable on the inside, where the tiny width advantage the Creta has, is easy to see. At 4,225 mm long, the Kushaq is longer than the typical sub-four-metre SUV, but 75 mm shorter than the Creta. Much of this is down to the limitations of the MQB A0 IN platform the Kushaq shares with other VW Group models such as the Volkswagen Taigun and Skoda and Volkswagen’s upcoming midsize sedans. The way Skoda says it, customers yearn for a car which is easy to park and handle in the city. Perhaps it’s a bit of both.

Skoda brings European sensibilities to this segment, but with the Korean incumbent so firmly seated, it had to bring the angaar. The equipment list is formidable – as it needs to be for the Kushaq to go up against the well-stocked Creta. My most recent drive in a Skoda was in the excellent fourth-gen Octavia, and I’m happy to say that I was satisfied with the qualities of the Kushaq, even if it is positioned several price slabs down. 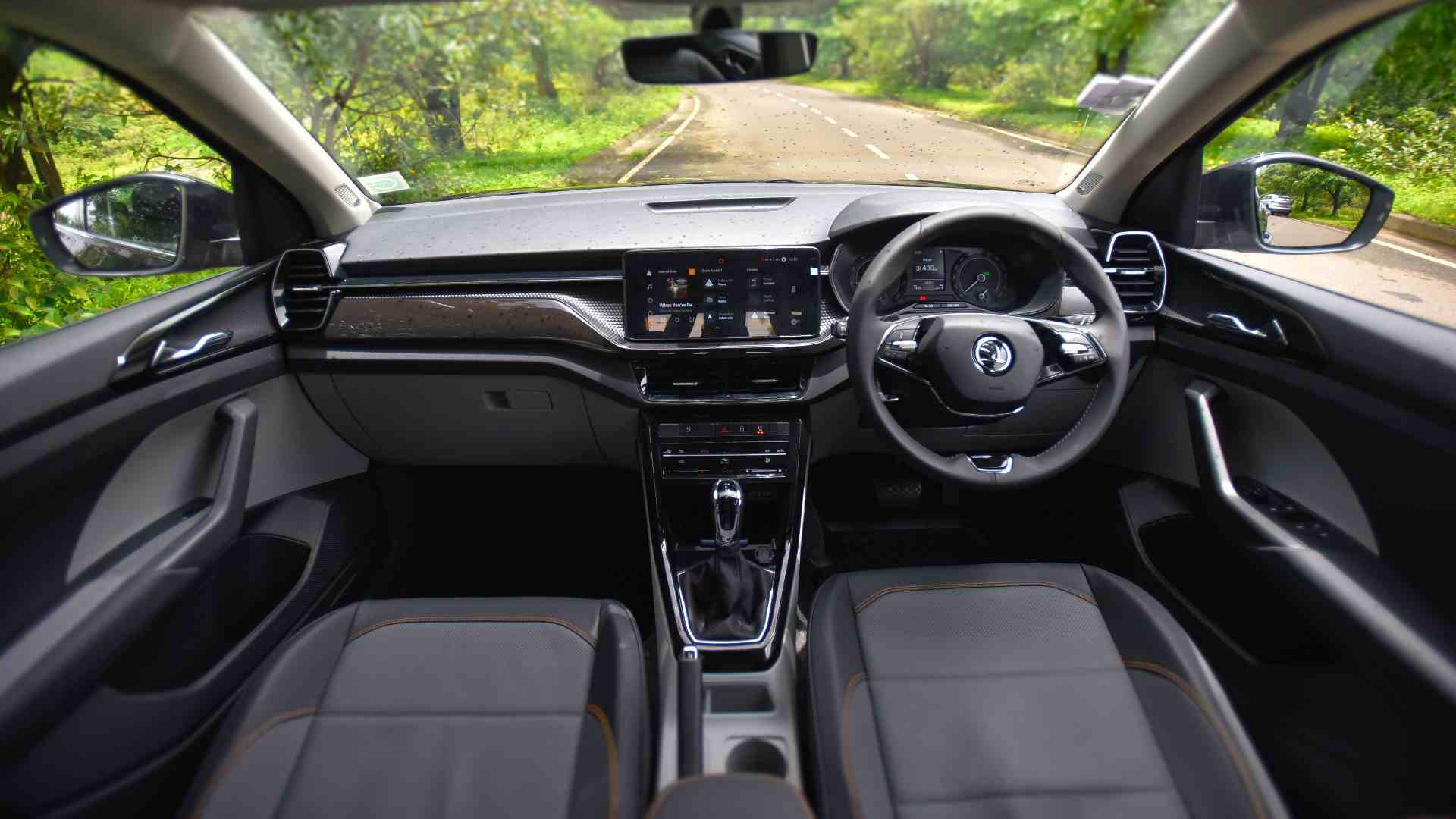 Plastic quality is unremarkable, but on the whole, the interior of the Skoda Kushaq is a great place to be. Image: Overdrive/Anis Shaikh

What Skoda has achieved in this relatively small inner volume is impressive. The Kushaq itself is narrow; you can reach over to the opposite door with ease. Still, it felt roomy and comfortable, with plenty of glass area to let light in. There was a sunroof on our test car, but it was a traditional size, not panoramic, and the shade is manually operated. The plastics have some interesting textures to break the monotony, but the quality is scratchy and unremarkable. There is some piano black in places, and it’s not awful. The steering wheel is better, and like the one on the Octavia. The layout of the buttons and the knurled scroll wheels are excellent to use, and I’ve grown accustomed to the two-spoke design.

Seating too, is a notch above the impression left by the plastics. The grey colour is fetching, the upholstery taut, and comfort was good for myself and for my much larger passenger. Going up against the Creta, Skoda simply had to put in ventilated front seats, which we used to great effect in unforgiving Mumbai traffic. I think this should be standard fitment for our weather conditions. However, the seats were curiously noisy when ventilation was enabled. You can clearly hear the hiss of air escaping the perforated leather. Three-abreast at the back of the Kushaq not feasible, but two passengers will be pretty comfortable. Image: Overdrive/Anis Shaikh

The rear accommodations are where the compact size of the Kushaq makes itself felt. Despite the relatively flat floor pan freeing up foot room, this is not a vehicle for three-abreast rear passengers. Stick to two, and the seats are surprisingly comfortable, with plenty of head-, knee- and shoulder-room. There’s a folding centre armrest with a couple of cup holders as well, which wasn’t very well upholstered, unlike the seats. All in, it really is quite impressive how fine the rear seating is. 385-litre boot is amongst the smallest in the segment, and the loading lip is high, too. Image: Overdrive/Anis Shaikh

The boot is deep, but small-ish, at 385 litres. The wheel arches do intrude quite a bit, so flat space is at a premium. There’s also a tall loading lip, so you will have to tug those large suitcases quite a bit higher to put them in there. The rear seats have a 60:40 split, so the cargo area can be extended if needed, and cargo capacity goes up to 1,405 litres with the seats folded down.

A word about tech

With every new car I drive, I’m happy to report the infotainment situation is improving by strides. Skoda’s 10-inch touchscreen is incredibly good, with a responsive interface and flawless wireless Apple CarPlay integration. After the first pairing, the phone stayed solidly connected to the car, Siri worked well, calls were loud and clear. Despite being glossy, the screen was visible in daylight glare and is high resolution, making text and icons really pop. 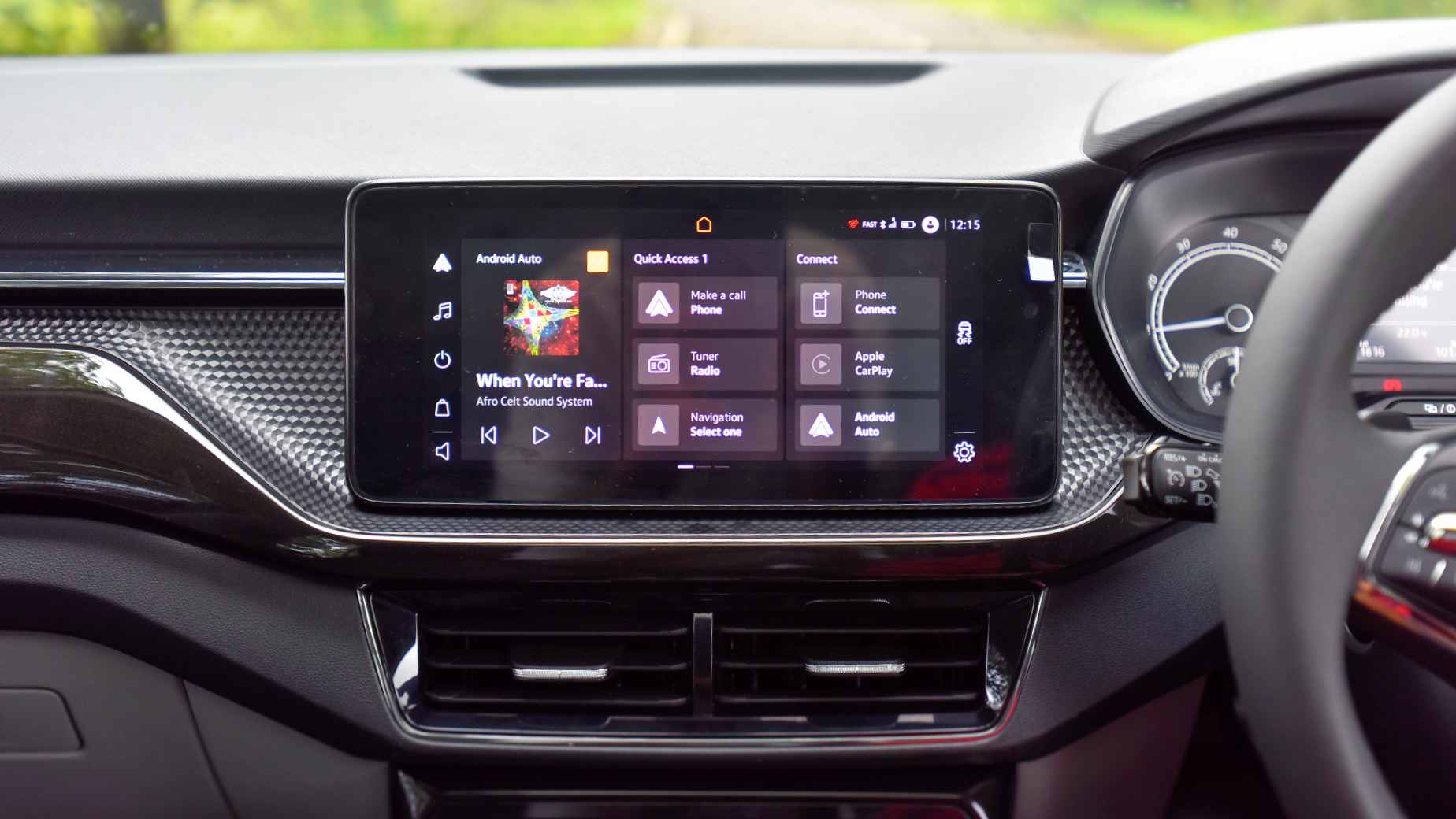 Items on the 10-inch touchscreen remain perfectly legible even in daylight glare, and the system is slick overall. Image: Overdrive/Anis Shaikh

Skoda is being brave with its choice of USB-C ports – two up front and two for the rear passengers. Most of us still use regular USB-A cables, so it’s probably best to keep a few adapters in the under-arm storage box. There is also a wireless charger up front, with a pair of handy rubber rails to help the phone slot perfectly into place. Unfortunately, in our testing, the wireless charging kept getting interrupted, which I narrowed down to an alignment problem. This is common with wireless chargers, but I assumed the specially designed cubby would prevent this. Flipping the orientation of my iPhone 12 Pro helped, but it still flaked out quite a bit.

I am also not a fan of the capacitive touch panel for the AC controls. Of all the touch points on the centre console, I think the AC controls should be physical knobs or buttons so one can use muscle memory to operate them. This system forces you to look down at the console, provides no tactile feedback and is just poor UX. On balance, the Skoda unit is one of my favourite infotainment systems in recent years. It also has a bunch of its own apps, as well as a companion app. Frankly, if it works with one’s smartphone, that’s all that’s needed.

Skoda has a self-branded 340-watt sound system in the Kushaq. It is passable but sounds tinny and much cheaper than the rest of the car. I didn’t use it much. 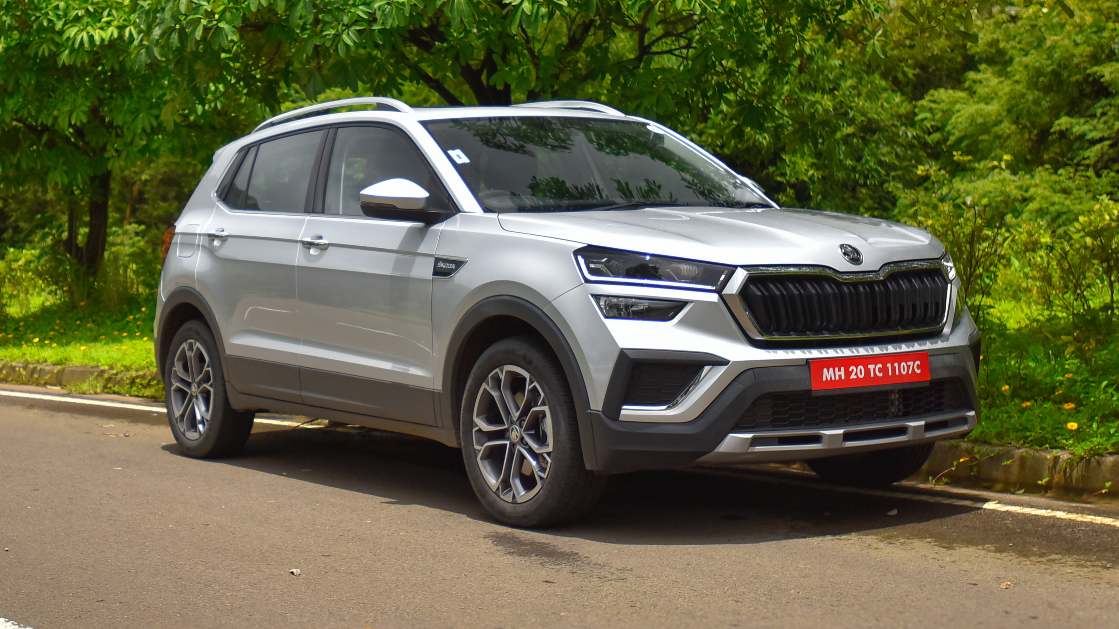 The Kushaq’s design is clean, sophisticated and is one of its strengths. Image: Overdrive/Anis Shaikh

I’ve enjoyed Skoda’s recent design language more so than Volkswagen’s. The Kushaq makes the most of its relatively compact dimensions. It has a purposeful side profile, a wide, somewhat aggressive family grille flanked by headlamps with LED DRLs. The rear, too, is clean, reminding me again – like with the Octavia – of some Volvos. The pictures speak for themselves. It’s a nice, European design with leading lines rather than curves. The 17-inch wheels fill the arches adequately and use an understated grey for the two-tone look instead of succumbing to the common, tedious “diamond-cut” trend. The supplied roof rack adds a sense of purpose. I like it. 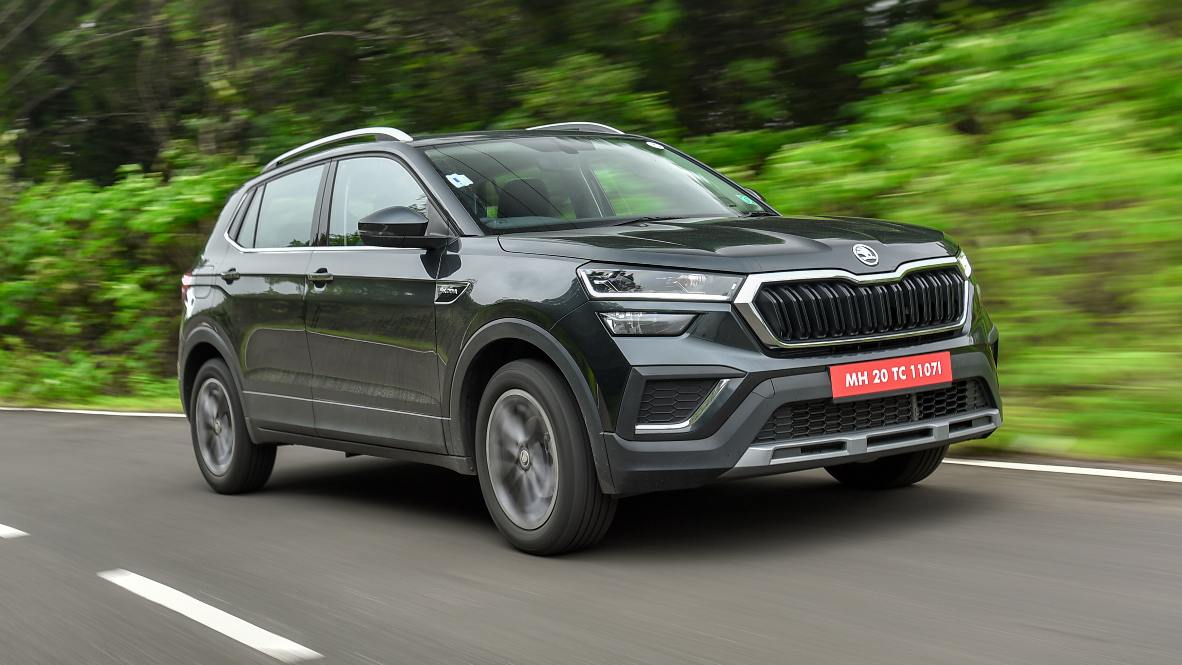 For those who enjoy driving, the Skoda Kushaq will be the midsize SUV to pick. Image: Overdrive/Anis Shaikh

On the go: great performance, dynamics

If I were to choose an SUV/crossover I’d like to drive exclusively on tarmac, this would be it for now. The Kushaq is a joy to drive, and our test vehicle (with the 1.5-litre TSI turbo-petrol engine) was perfectly potent for this size of vehicle. With 150 hp and 250 Nm on tap and a seven-speed DSG dual-clutch automatic, the Kushaq never felt wanting for more punch. The gearbox is quick and seamless enough to allow effortless overtakes, and 250 Nm is plenty to not require downshifts. There are paddle shifters available if you’d like to take control. I never touched them. It really is a sprightly, enthusiastic drive without feeling aggressive or hairy.

The Kushaq also feels quite easy to throw around thanks to its light steering and narrow width. I was able to park the SUV on Mumbai’s French Bridge – which is barely motorable – while keeping plenty of room for passing cars. It’s actually easier to park than an average hatchback, thanks to the tall seating and visibility. There are no drive modes available, but slotting the transmission into ‘S’ made things a bit peppier, if not noisier. Noise, vibrations and harshness are also well-controlled.

Skoda seems to finally be shaking off the curse of past Volkswagen suspensions. For the first time in forever, I didn’t feel the tell-tale thuds and rumbles over bad patches of road or misjudged speed-breakers. Ride is firm, but supple and feels sophisticated. This is definitely a car I want to spend more time with.

A mid-size SUV for enthusiasts

Launched today, the Skoda Kushaq range starts at Rs 10.50 lakh for the base Active 1.0 TSI version, and stretch all the way up to Rs 17.60 lakh for the range-topping Style 1.5 TSI DSG (all prices, ex-showroom, India). I find myself struggling to call the Kushaq a “midsize” SUV, seeing that it is visibly smaller than the direct competition, but we’ll go with it. It has room to seat four quite comfortably, has a bit more than the basic amenities, an acceptable amount of cargo room. Where it stands out is in its dynamic ability and fun factor. Even with the 1.0-litre turbo-petrol option, the power figures (115 hp and 178 Nm) seem adequate to keep up with others in the category. We’ll have an update on that variant once we drive it.

The Skoda Kushaq is easily the most fun SUV I’ve driven in recent memory, regardless of size. Sure, if you shop with an excel sheet, you’re likely to find that its rivals have the edge on equipment, but the combination of style, build and performance have thrust the Kushaq to the top of my list.