A functional fitness tracker without all the bells and whistles- Technology News, Firstpost

Let me make one thing clear at the outset – the Garmin Venu Sq is a solid fitness tracker, but for an average user, its price tag of Rs 25,990 means the Apple Watch SE is a better option, because, for that money, you get a smartwatch from a premium brand with all the extra frills and bragging rights. However, if you are flexible on the frills front and are primarily looking for a fitness tracker, then read on, because the Garmin Venu Sq might just tick all the boxes for you.

The Garmin Venu Sq has everything! It tracks your heart rate and footsteps, monitors sleep, has an in-built GPS, tracks and guides you through workouts and can also read SpO2 levels. The smartwatch offers about six days’ worth of battery life and is compatible with both iOS and Android devices. Garmin Venu Sq lets you do on-the-spot SpO2 level checks, in addition to the daily records of your oxygen levels it maintains. Image: Nandini Yadav

Health and fitness tracking has always been Garmin’s strength, and it’s apparent with the Garmin Venu Sq as well, which features continuous blood-oxygen level tracking. The watch lets you do on-the-spot SpO2 level checks, in addition to the daily records of your oxygen levels it maintains. Now, that’s not a feature exclusive to Garmin – the Apple Watch Series 6 lets you track your saturation levels, too, but that costs an eye-watering Rs 52,900 – for a watch.

I also used an oximeter to compare the pulse and SpO2 readings on the fitness tracker, and almost every time, the reading was identical to the last decimal.

Besides the SpO2 level tracking, my other favourite feature on the Garmin Venu Sq is sleep tracking. The watch identifies stages of REM and lets you know what your SpO2 levels were while you were asleep.

The Garmin Venu Sq also lets you set high and low heart rate alerts, which let you know if your heart rate is too low or crosses an acceptable threshold.

If you are training for a marathon or want to determine how fit you are, the Garmin Venu Sq comes with a breathing rate and estimated VO2 level tracker, which is basically the maximum amount of oxygen your body uses when you work out. The higher the VO2 level, the fitter you are believed to be. I was happy with my VO2 level anyway, thank you very much. The fitness tracker also comes with some pre-loaded workout modes for activities including boxing, Yoga, Pilates, strength-training, etc. Although when I was using the watch, I was mostly just wearing it for a run and during my 30- to 40-minute Yoga practice.

To check the accuracy of the watch’s built-in GPS, looking my funny-best, I wore both the Garmin Venu Sq and Apple Watch SE on each arm. I wanted to see how similar or different the calorie burn count and distance would be on both watches. While the number of calories burnt was 75 kcal apart on both, the distance tracked was the same.

During this comparison exercise I also realised the Apple Watch SE shows elevation levels, while the Garmin Venu Sq does not; the latter lacks a gyroscope or altimeter. 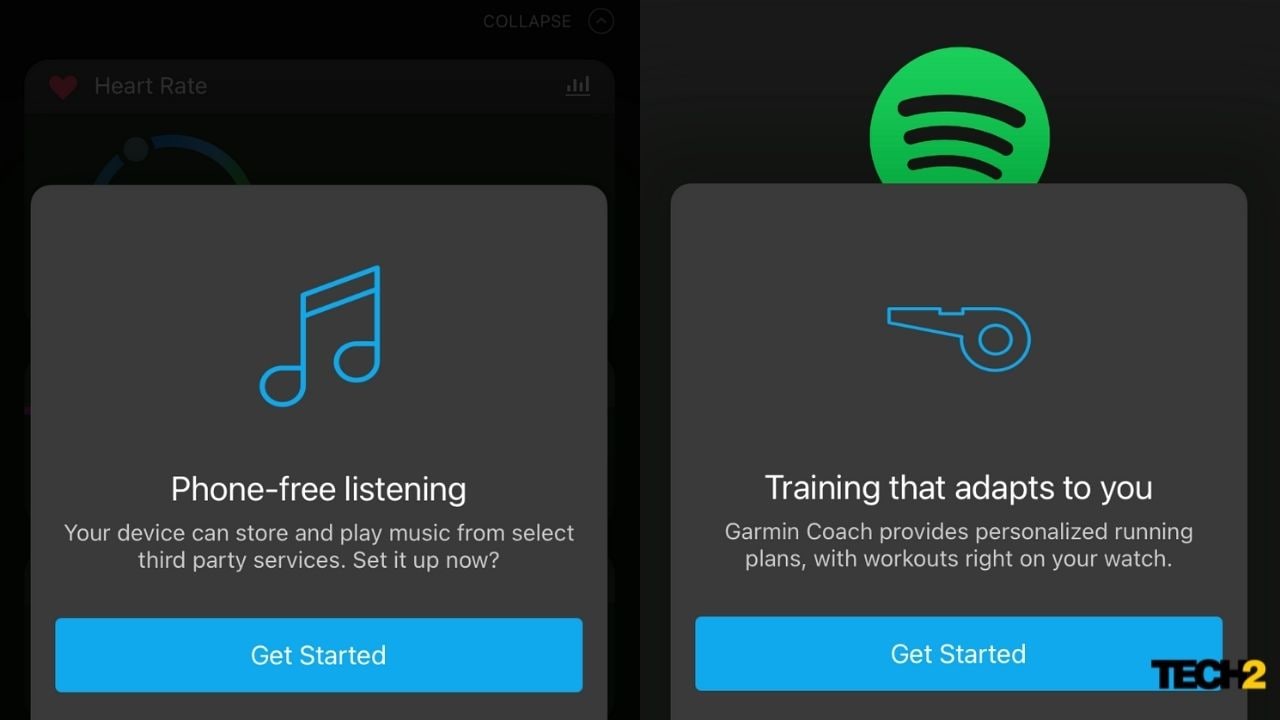 The Garmin Venu Sq lets you save your music offline on the watch. Image: Nandini Yadav

Finally, the Venu Sq Music I reviewed allows you to store music offline on the watch. I synced the Spotify app, because for some reason for me, syncing the Apple Music app turned into a battle and I surrendered early into the fight. The Music edition of the watch basically lets you download music offline from the apps onto the watch. You can later pair your headphones with the watch via Bluetooth and listen to those songs.

(The Music edition also comes with Wi-Fi; the standard edition only features Bluetooth.)

The Garmin Venu Sq also comes with other smarts, but they seem half-baked. The watch notifies you about calls and messages, but only with an Android device can you decline a call or respond to a message. Messages can also be responded to only via pre-composed texts. 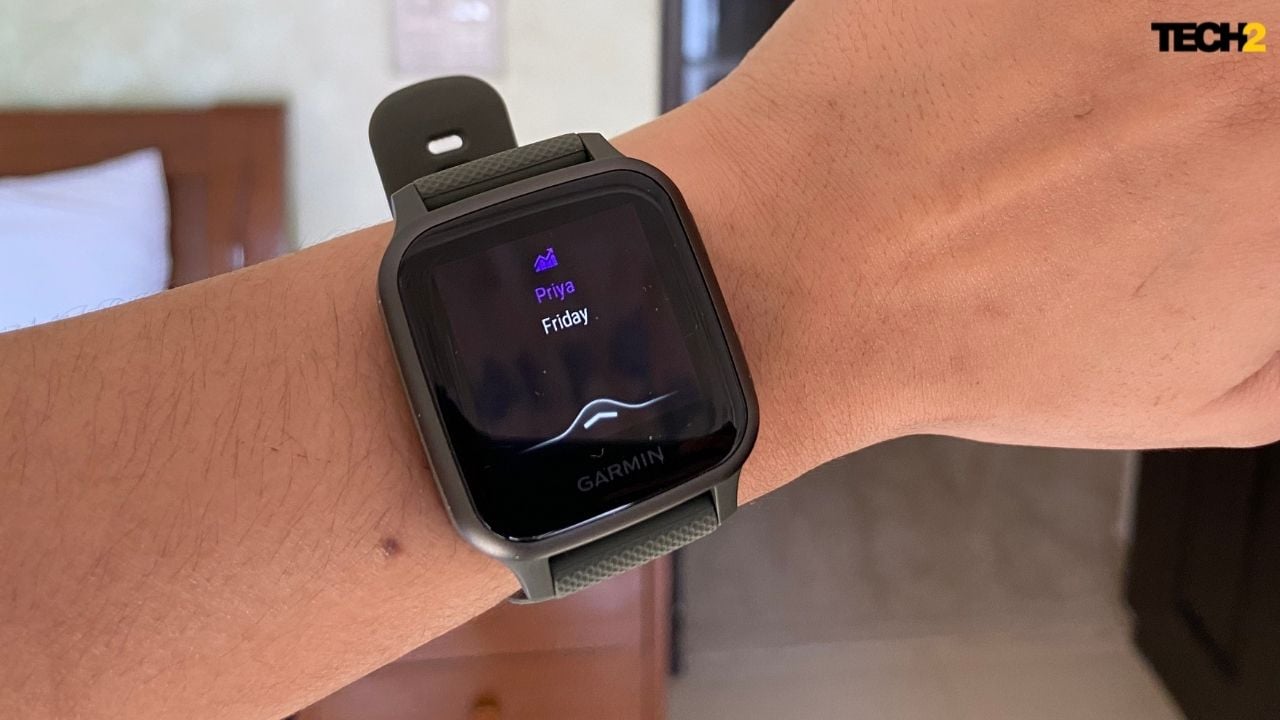 Garmin Venu Sq does not allow you to filter notifications on the watch. Image: Nandini Yadav

The watch has no in-built mic or speakers, which means you can’t answer calls or use voice-to-text to respond to mails/messages. And this gets worse when you can’t filter the notifications you get on the watch. If the notifications are turned on for your phone, they’ll also reach the watch, causing a buzz on your wrist.

And that buzz! Remember the BUZZ!!! on Yahoo Messenger? The Buzz that made it seem like your entire window/computer screen was shaking? The alert vibration on the Garmin Venu Sq is just slightly worse than that.

On a day packed with mails, calls and messages, I often had to take the watch off because it left me with a strange sensation in my wrist, primarily because I found the vibrations quite distracting.

The Garmin Venu Sq features a 1.3-inch LCD square display, which feels dull and cramped. During workouts, the screen somehow felt smaller when I couldn’t see all the stats properly; I had to scroll right to the end to find my heart rate levels.

If you have never used a Garmin watch before, the UI of the watch takes a while to get used to, and it also feels a bit archaic. Initially, I was aiming in the dark with the clicky buttons on the watch, and it was only a day or two later that I actually got a hold on the watch controls.

Overall, the Garmin Venu Sq is decent for a fitness tracker. It is loaded with everything you would need to track your health and fitness. However, the watch dramatically misses the ‘wow’ factor. Because of this, even though the Venu Sq offers the best package in its price segment, anyone looking for a more premium smartwatch may just want to add an additional month’s EMI and get the Apple Watch SE, or even Garmin’s own Forerunner 245 Music or the original Garmin Venu.