The China National Space Administration (CNSA) has released a photograph of the Martian surface clicked by the orbiter of the Tianwen-1 probe. According to a report in CGTN, the picture shows the Zhurong rover and its landing platform on the Martian surface. This photograph was clicked on 2 June at 4:30 am IST (6 pm CST) by a high-resolution camera that has been installed on the Tianwen-1 orbiter. CNSA said that out of the two bright spots visible in the photograph, the smaller spot is the Zhurong rover while the larger one is the landing platform of Tianwen-1. 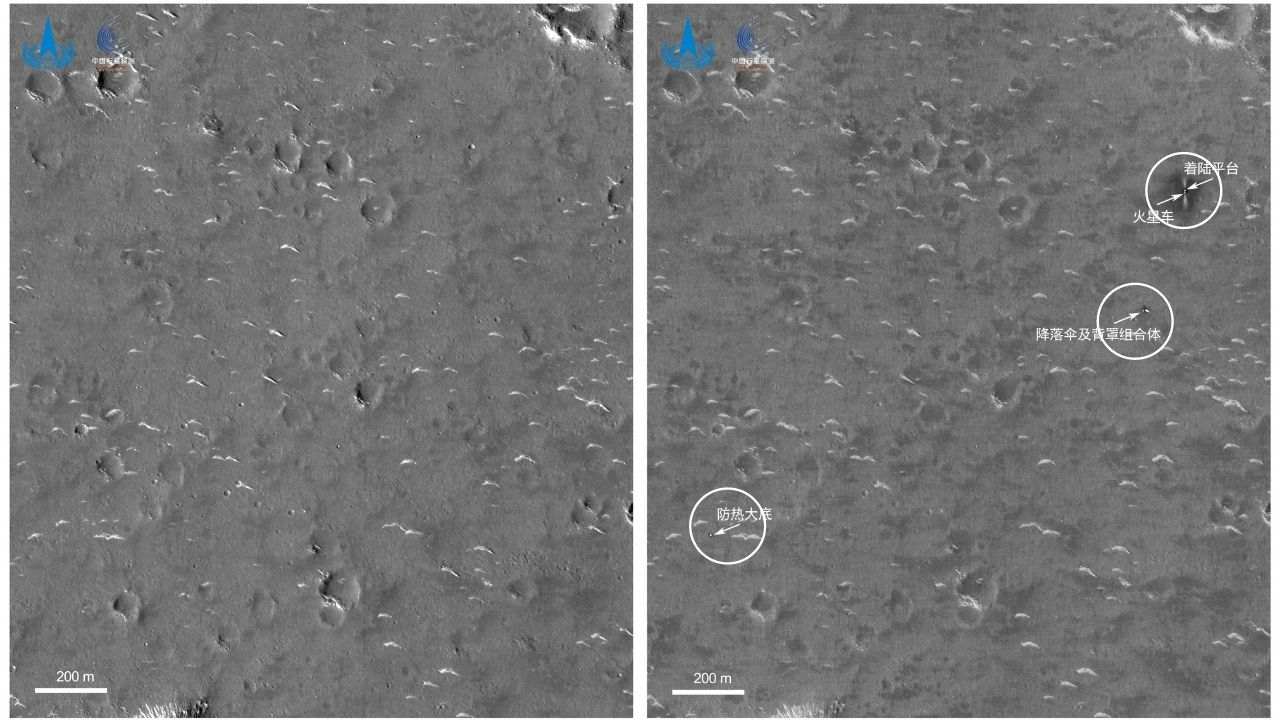 A new image taken by a high-resolution camera installed on the orbiter of Tianwen-1 at 6 p.m. on June 2 (Beijing Time), shows the landing platform and the Zhurong Mars rover on the Martian surface. Image credit: CNSA

The statement added that a dark area circling the larger spot may be due to the ‘engine plume during landing,’ reported China.org.cn.

The entry capsule’s back cover and parachute jettisoned during landing caused bright spots in the centre.

CNSA also stated that when the remaining fuel was emptied after the landing, it could have caused bright stripes near the platform in the north-south direction.

Zhurong rover is named after the god of fire in Chinese mythology and coincides with the Chinese name for Mars —Huoxing or the fire planet. Tianwen, on the other hand, means Questions to Heaven and is named after an ancient poem by the Chinese poet Qu Yuan.

On the morning of 15 May, the lander and rover of Tianwen-1 landed on Utopia Planitia which is on the southern part of an icy region on the surface of Mars. The Tianwen-1 mission was launched from Earth on 23 July 2020. It consists of a rover, lander, and orbiter. This is the first time that any other country except for the United States of America has managed to safely land on Mars.

The Zhurong rover completed 23 Martian days on Sunday, 6 June, reported CGTN. One day on Mars is equal to one day and 37 minutes on Earth. It has a mission life span of at least 90 Martian days which is about three months on Earth.

The orbiter of Tianwen-1 is currently in Mars’ low orbit. In order to relay data between the Zhurong rover and the station on Earth, it takes a period of 8.2 hours. It has a mission life of one Martian year which is about 687 days on Earth.