A niche fitness watch for those who dream of triathlons- Technology News, Firstpost

If the world was divided into two types of people – those who train for Triathlons and everybody else – this product is strictly meant for the former. The Titan TraQ Triathlon is an extremely niche product catering to that community of fitness freaks, helping them track their fitness data and performance. Most people will think of it as a first-generation fitness watch, and rightly so. Let’s take a close look at what this product is all about. 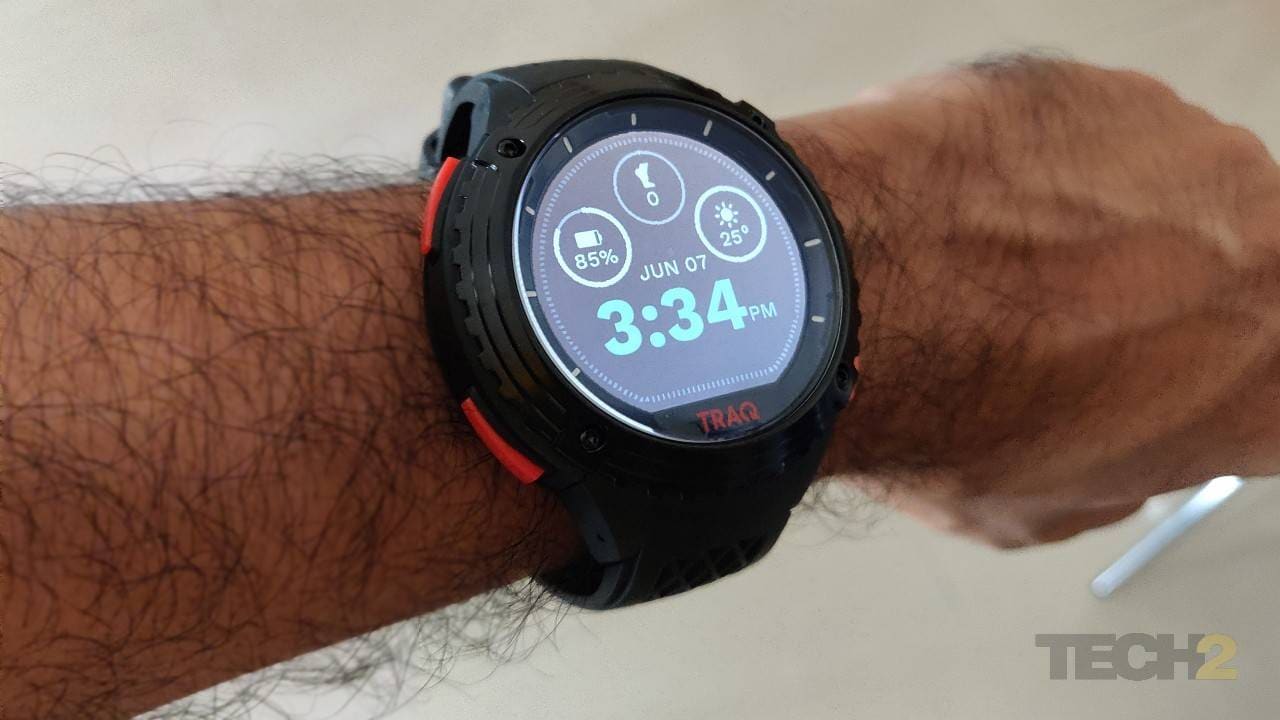 What can the Titan TraQ Triathlon do?

A lot of brands use fancy names for their products, and I thought this watch was one of them. But no, Titan took the Triathlon bit quite seriously, and the watch is literally meant for those who train for Triathlons and participate in them. Understandably, their needs are different to those of the average user, who seeks a tracker for basic day-to-day fitness activities with a handful of smart features (notifications, messaging, calling, etc.) thrown in. Triathletes need accurate tracking of their fitness activities that involve high-intensity training, running, swimming, cycling, and a device that lets them optimise their performance further. This watch is that device.

The display is highly energy-efficient and takes precious little toll on the battery. Image: Tech2/Ameya Dalvi

The Titan TraQ Triathlon can track walking, running, swimming, cycling and the triathlon itself – automatically switching between the three main activities. The company claims the watch can do it with a higher degree of accuracy courtesy a built-in MediaTek GPS and heart rate monitor. The latter provides five heart rate zones – from warm up to maximum intensity – for better pace management. One interesting feature here that several triathletes should find handy is ANT+ compatibility to connect with ANT-enabled devices such as heart rate straps and foot pods to measure parameters such as cycling power, cycling cadence, heart rate and stride-based steps. Smart features are limited to call and message alerts, music controls and weather updates.

It is targeted at triathletes, but it could have done with a few more features such as a SpO2 sensor that would have come in handy for them as well. Image: Tech2/Ameya Dalvi

For starters, it is a rugged watch and looks like it’s built to endure the harsh grind of a triathlon. It is 50 metres water-resistant, mud-resistant and also impact-resistant. Though I did not drag it through mud to test the claim, take one close look at it and you’ll realise the claim isn’t far from the truth. It has a 1.34-inch transflective colour display that’s visible in all situations, regardless of you facing bright sunlight or stepping out at night. The display is highly energy-efficient and takes precious little toll on the battery. The screen is protected by a layer of toughened mineral glass.

Since this watch has a transflective display, don’t expect the sharpness and colour vibrancy of LCD or AMOLED screens that you get on most fitness watches these days. Image: Tech2/Ameya Dalvi

Battery life is pretty decent for a watch with built-in GPS. The company claims that its 290 mAh battery can go on for a week of intense training in standard mode. Not being remotely close to an athlete myself, I obviously couldn’t verify the battery life claims in those test conditions; however, one thing I can vouch for is that the watch has amazing standby time. The battery drops by barely one percent if you don’t use it for a couple of days at a stretch. GPS connectivity is good; it latches on to the signal fairly quickly and the distance readings on walks and jogs were reported accurately.

What’s not so good about the Titan TraQ Triathlon?

It feels bulkier than even a Casio G-Shock and looks a little out of place even if you have normal-sized wrists. Image: Tech2/Ameya Dalvi

The watch is huge, and probably the largest I have tested in the recent past. It feels bulkier than even a Casio G-Shock and looks a little out of place even if you have normal-sized wrists. While build quality is solid, it feels a bit too plasticky for my taste and has some sharp edges as well. The five physical buttons feel a little flimsy and do not exhibit the same level of sturdiness as the rest of the watch. Since this watch has a transflective display, don’t expect the sharpness and colour vibrancy of LCD or AMOLED screens that you get on most fitness watches these days. The screen isn’t touch-sensitive either, and the entire operation of the watch and its user interface is dependent on the aforementioned buttons.

Speaking of the user interface, it is one of the most difficult I have come across and feels like it belongs to an old digital watch. It feels tacky and can be hard to make your way through even if you read the accompanying manual. It takes time to get used to it, and even more so if you are subjected to better interfaces of popular fitness watches around today. I couldn’t master it even after ten days of use. Also, the functionality is fairly limited for a watch priced close to Rs 20,000. Yes, it is targeted at triathletes, but it could have done with a few more features such as a SpO2 sensor that would have come in handy for them as well.

The company claims that its 290 mAh battery can go on for a week of intense training in standard mode. Image: Tech2/Ameya Dalvi

The Titan TraQ Triathlon is priced at Rs 17,999 with a one-year warranty. That makes it more expensive than the likes of certain Fitbit models, and also the all-weather Amazfit T-Rex and T-Rex Pro that are priced a good Rs 5,000 to Rs 8,000 lower, offer many more features, better battery life and a superior touchscreen display. Yes, the Garmin models targeted at a similar audience are more expensive, so for that niche, this Titan watch may serve as a relatively affordable option. But do double check if it ticks all your requirement boxes before buying it.

Should I buy the Titan TraQ Triathlon if I am not into triathlons or athletics?

For casual users, there are far better options available for half or even one third the price of this Titan watch, which not only look a lot more stylish but also provide you with a longer list of features. If a non-athlete were to buy it, the Titan TraQ Triathlon may feel like the way the One Ring did when it ended up in the hands of Gollum or Bilbo. (Never cared for the feelings of the ring, did you?) Nor would you think of it as your precious, and it will meet the same fate as your new year’s fitness resolution.