It may be giving a 1,000% return, but here’s the truth about DubaiCoin | Condé Nast Traveller India


In Dubai, if it glitters, it is often gold. But not this once, the city wants you to know loud and clear. DubaiCoin may sound like it is “official”, but it has no connection to the city of Dubai and the website that was selling this currency was nothing but an elaborate phishing scam, the city has warned.

DubaiCoin has been around for a few months, but it caught the spotlight in the third week of May. A mysterious chain of communication pointed people to a website, which claimed that DubaiCoin was the official cryptocurrency launched by the city of Dubai. “Consumers can use DubaiCoin to pay for goods and services, both online or in person… The intent is for the coin to be used in place of regular paper money. The circulation of DubaiCoin will be controlled by the city itself as well as authorized brokers.” Turns out, this was a lie.

Is DubaiCoin real? And is it official?

This is the part where things get confusing. As a cryptocurrency, DubaiCoin does exist. It has been launched by a UAE-based company called Arabianchain Technology. However, it is not the official cryptocurrency of the city of Dubai and it has no legal or official sanction. Even Arabchain Technology never made any claims of it being officially associated with the city of Dubai. So what’s the fuss? Turns out, a team of scamsters set up a website to phish data and money out of unsuspecting crypto investors. They piggybacked on the official-sounding currency to scam people out of their money. The modus operandi was basic: the website asked users to fill out a form, following which an “agent” would call up the customers and offer to exchange their Dirhams or Dollars for DubaiCoin and complete the scam.

On 28 May, the Dubai government stepped in to warn investors that the website selling DubaiCoin was, in fact, a phishing scam.

Dubai Coin cryptocurrency was never approved by any official authority.
The website promoting the coin is an elaborate phishing campaign that is designed to steal personal information from its visitors. pic.twitter.com/Q0HBXfqaDO

So though this one website and its claims that DubaiCoin was official turned out to be fake, DubaiCoin still exists in the cryptoworld as DBIX. As per Crypto.com, it has been trading since at least January this year though some sites date it all the way back to 2017. For the most part, it’s value has hovered around $0.1, but it shot up over 1,000% last week to $1.13. There are currently 4.26 million units of DubaiCoin in circulation, and over $590,000 worth of trade has taken place over the last 24 hours. In crypto world, those are slim numbers. Notably, most of the top crypto currency exchanges are no longer trading DubaiCoin. 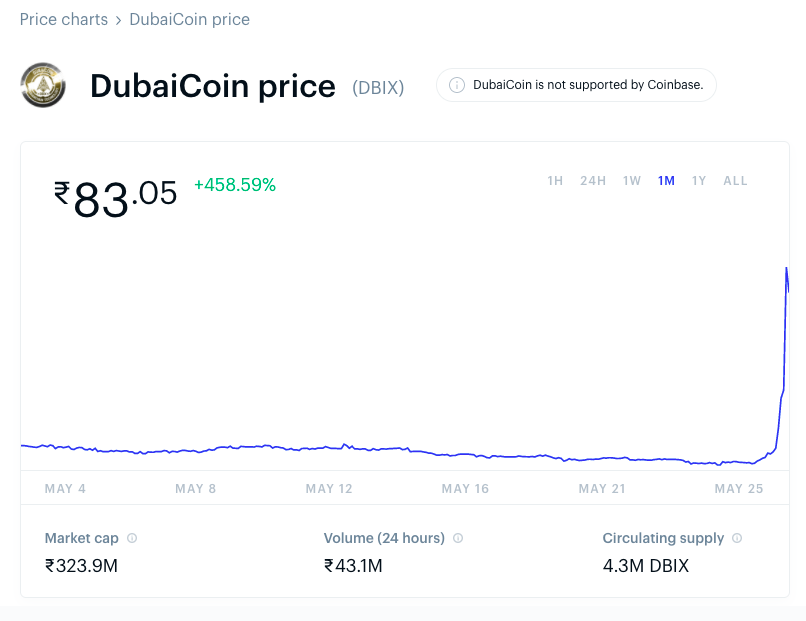 So while DubaiCoin is around it is not the official cryptocurrency of Dubai. And it has very little street value yet, which means it is unlikely you can use it to pay for the world’s most expensive biryani.

On or off? From Olympics to Oktoberfest, here’s what is happening and what’s not this year | Condé Nast Traveller India