A new study from NASA shows that in the past, on Jupiter’s moon Europa, there might have been volcanoes erupting on the seafloor. Researchers believe that this volcanic activity might still be taking place. Contradictory to this steaming, bubbling underground, Europa has an icy, cool crust covering its global ocean. Europa is thought to have three layers – its icy shell, the ocean and the rocky interior. It is thought to have twice as much water as Earth and it might be the most promising place, in our solar system, to find life. 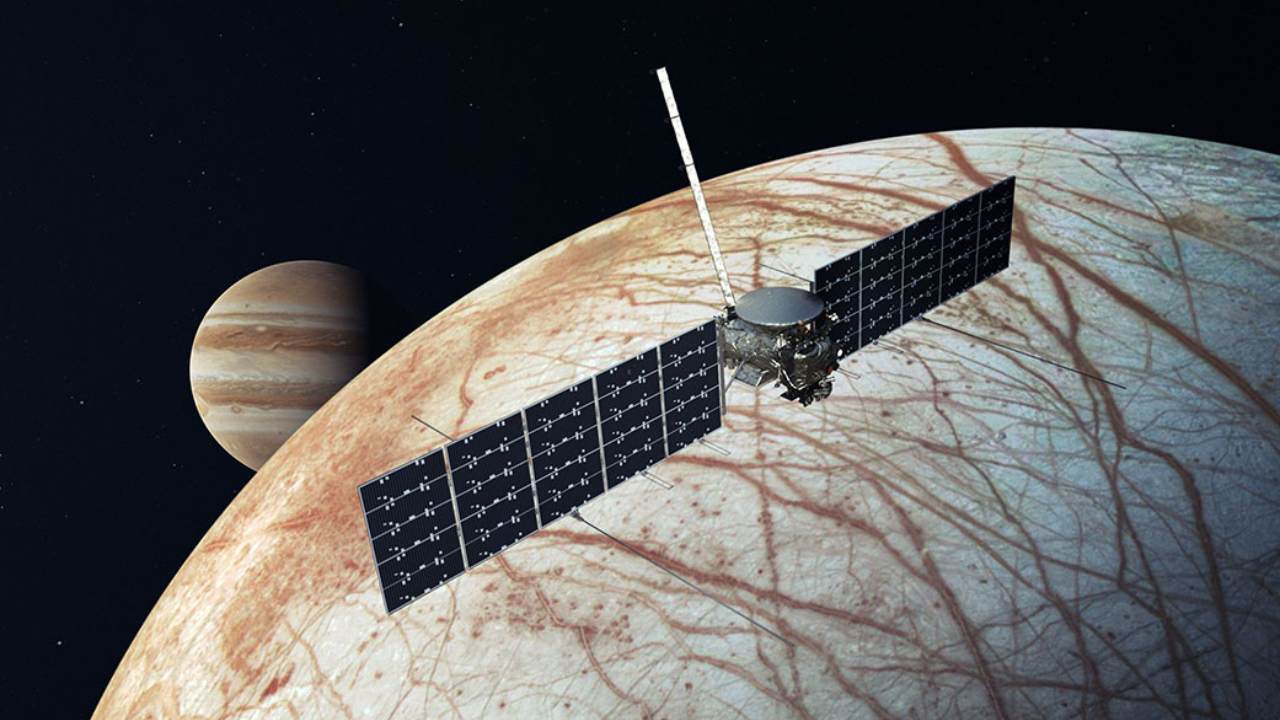 This illustration, updated as of December 2020, depicts NASA’s Europa Clipper spacecraft. The mission, targeting a 2024 launch, will investigate whether Jupiter’s moon Europa and its internal ocean have conditions suitable for life. Image credits: NASA/JPL-Caltech

The study has been conducted by researchers at the Czech Republic’s Charles University and the results have been published in the Geophysical Research Letters. Jupiter has an enormous gravitational pull on its moons. According to a NASA press release, as Europa revolves around the planet, its interiors are flexing which in turn causes the moon’s interior to heat. The heat generated increases with an increase in the flexing of the moon.

With the help of computer modelling, this new research shows that the moon could have enough heat to partially melt its rocky interior layer. This process could be feeding its volcanoes.

According to Space.com, Europa’s volcanoes could power chemical energy-rich environments which will further help potential lifeforms in Europa.

Marie Běhounková, lead author of the study said that their research provides additional evidence that the subsurface ocean of Europa has an environment suitable for life.

Europa is one of the rare planetary bodies that might have maintained volcanic activity over billions of years, and possibly the only one beyond Earth that has large water reservoirs and a long-lived source of energy,” she added.

All the information we have comes from the five spacecrafts that have visited this moon and Hubble does periodic checkups. Most of it comes from the observations conducted by the Galileo spacecraft.

However, as soon as 2024 NASA has plans to send a spacecraft —Europa Clipper — to this moon. It will launch in 2024 and will make about 45 close passes over Europa. It will keep shifting its flight path to fly over a different location and it will be able to scan nearly the entire moon.

This will be the first spacecraft that will conduct a dedicated study of the ocean world present in Europa. The Clipper is expected to reach in 2030 where it will orbit Jupiter and it two other moon — Ganymede and Callisto.

When it reaches its target, the Clipper will measure the moon’s gravity and magnetic field, anomalies in those areas, especially toward the poles, could help confirm the volcanic activity predicted by the new research.

The prospect for a hot, rocky interior and volcanoes on Europa’s seafloor increases the chance that Europa’s ocean could be a habitable environment,” said Robert Pappalardo, Europa Clipper Project Scientist at NASA’s Jet Propulsion Laboratory. “We may be able to test this with Europa Clipper’s planned gravity and compositional measurements, which is an exciting prospect.”

Why traceability undermines encryption and puts us all at risk- Technology News, Firstpost