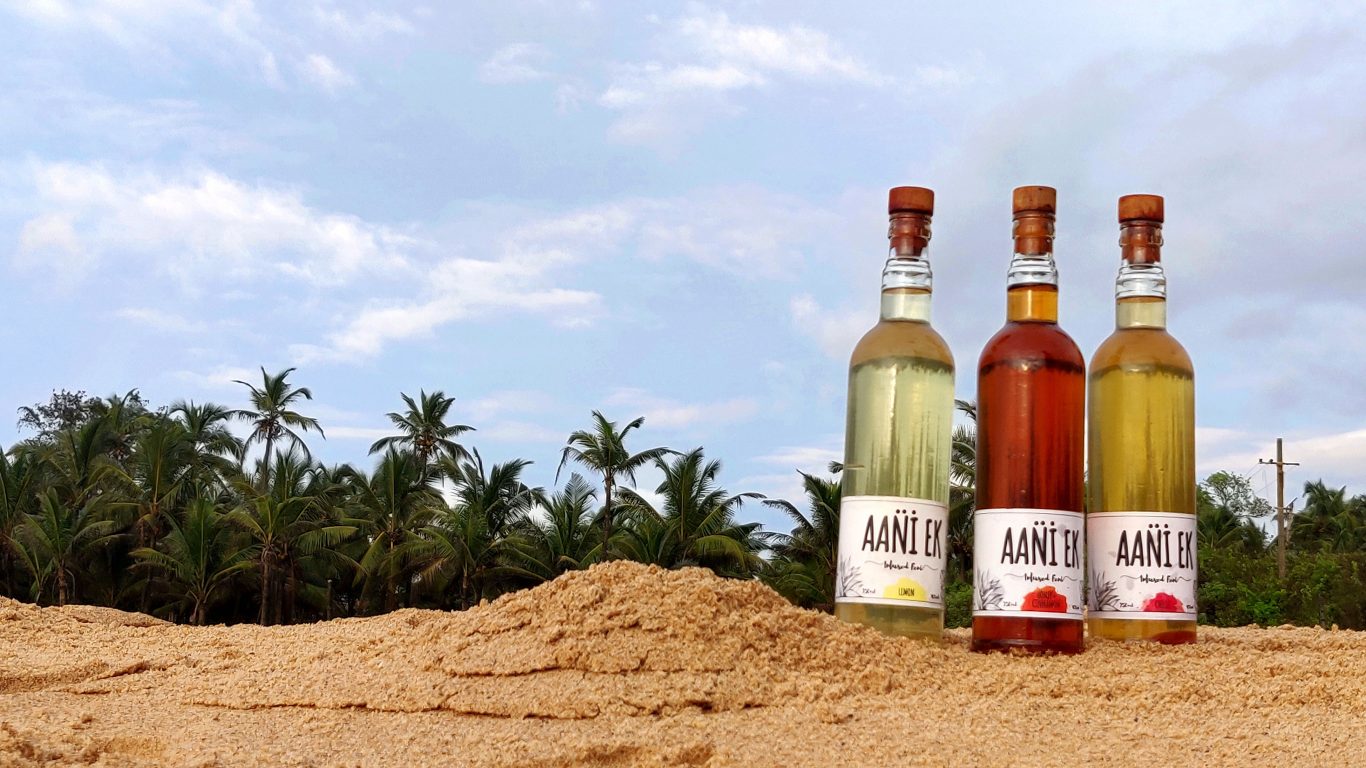 Aani Ek on a beach in Goa

“Feni is in every Goan’s DNA. As a kid in Goa, if you have an earache, feni is warmed up and dropped into your ear. If you have an upset stomach, a tablespoon of feni is lit to burn the alcohol off and fed to you. It’s an intrinsic part of our lives,” says Clement DeSylva. An architect by training, DeSylva switched gears to focus on his passion full time, a year ago. Many infusions and experiments later, DeSylva, along with his partners Jill D’souza, Karlyle Gomes and Pritesh Desai are gearing up for the launch of Aani Ek, a set of artisanal infused fenis.

For the longest time, feni has been the ‘smelly’ Goa souvenir. “Tourists who travel to Goa try cheap feni that’s more ethyl alcohol than the real thing. They sample it for the novelty factor and then swear off it for life,” explains DeSylva. The drink’s reputation doesn’t help: a strong country liquor that’s guaranteed to knock you out—if not for its smell then with its alcohol content—and leave you with feni sweats for days to come. “It used to really get my goat when I heard people talk about feni in that way. They have no idea what they’re missing out on. Locals are very particular about the quality of feni they drink, so there are many expert suppliers across Goa. The problem is, that we love feni so much, no one is willing to share their supplier’s details.” laughs DeSylva.

Save a few local brands, feni in Goa has largely remained an unorganised business. The feni industry owes much to Valentino Vaz of Madame Rosa Distillery (Big Boss feni) and the Henriques of Rhea Distillery (Fidalgo feni), who worked with local authorities to get feni its proper due. Like Champagne in France and Tequila in Mexico, feni has a GI (geographical indication) tag. The tag, awarded in 2009, dictates that the classified “country liquor” can be called feni only if produced in Goa.

A few years ago, Hansel Vaz, a Goan geologist who came from Goa’s ‘first family of feni,’—his grandma Sylvie and great grandmother Agnes made feni by hand—returned to the family trade to launch Cazulo, a premium feni label that acquired domestic and international fans. Hansel trained local bartenders to use it in cocktails with local ingredients like kokum and has worked hard to educate tourists about the spirit via his feni cellar, which is open for tastings and public tours.

“We’ve been able to launch Aani Ek thanks to the strong foundation that’s been laid in the market,” says DeSylva, who is the ‘feni aficionado and master infuser’ for the brand. Having been a fan of the Italian limoncello ever since he tried it on a trip to the country a decade ago, DeSylva has been tinkering with feni concoctions of his own. “When Goans consume feni at home, they usually drink it with lime juice, chilli and Limca. We wanted to do something that draws from this and elevates the drink,” says DeSylva, while explaining how the three variants of Aani Ek are all feni infusions. “Our infusions ( limon, honey+ cinnamon and chilli) tone down the strong cashew aroma that puts many drinkers off feni. Infusing the spirit clarifies the cashew flavour and the other notes in it make it instantly drinkable. The honey cinnamon infusion is comforting, like Christmas in a drink. We recommend drinking it neat, or on the rocks.”

The tall rounded bottle that Aani Ek’s feni infusions come in is perfect for bartenders to hold and twirl in their hands while fixing feni cocktails. To help further educate their customers, the team will be including a cocktail recipe booklet to encourage folks to experiment with the spirit. The booklet suggests the use of ingredients that are easily available at home (honey, cucumber, apple juice, Tabasco), so as to remove any hesitations to try the drink. The feni will be available by June 2021 in Goa, and then in international markets like Portugal, Canada, New Zealand. Post that, it will be available in a few cities across India.

“Aani Ek translates to ‘and one more’ in Konkani and Marathi. We’re hoping that people will be saying just that when they try our feni,” says Karlyle.

What would Friends look like if it was shot in Mumbai? | Condé Nast Traveller India