Citroen is set to ramp up its India operation significantly this year, with its range of heavily localised models from its C-Cubed program. The first of these is expected to be a compact SUV, the exterior design of which seems to have been leaked through these images of the SUV’s scale models. Said to be named the Citroen C3, the compact SUV should be launched in India sometime this year. Although, the second COVID-19 wave may delay proceedings. The India-spec Citroen C3 will be significantly different from the European version, as these images suggest.

The geometric styling remains and seems to have been heavily influenced by that of the C5 Aircross. So, there is a similar split headlamp setup with the integrated chevrons but with the new ‘X’ LED lighting motifs seen on cars like the C4. The Citroen C3 features a large rectangular grille and an intricately stylised air dam below it with silver and orange highlights. 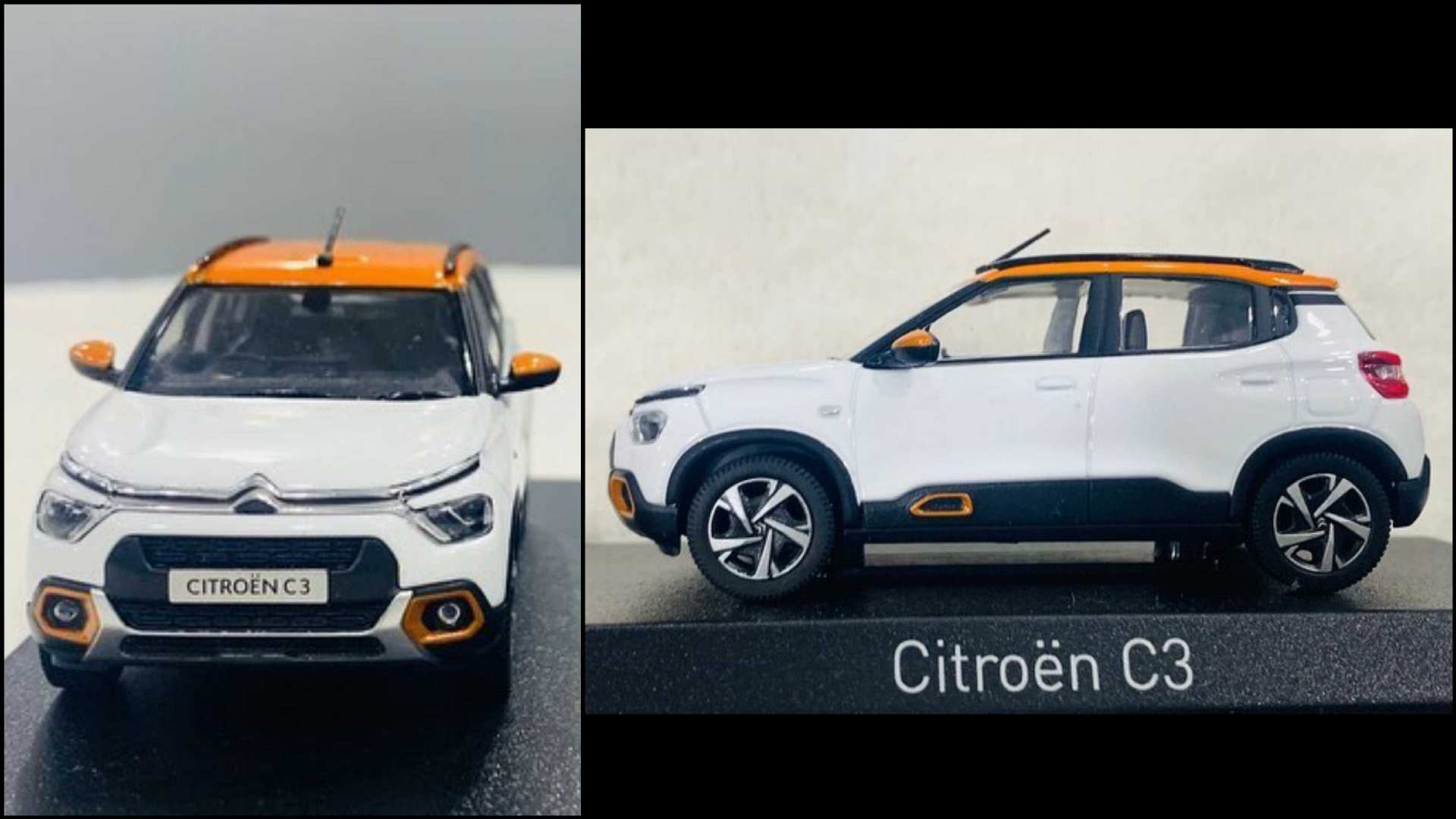 The production-ready Citroen C3 SUV for India is expected to debut later in 2021. Image: pine_0101

In profile, the sub-four-metre length is quite apparent and there is that slightly upright look and the straight C-pillar that is quite common in the brand’s cars. The ‘Airbumps’ make an appearance here, too, while there are dual-tone alloy wheels as well. The rear looks simple with a rounded boot lid, compact LED highlighted taillamps and a silver skid plate on the bumpers.

The Citroen C3 is expected to be based on a heavily localised architecture, possibly a development of Groupe PSA’s (now Stellantis) PF1 platform. There will be no diesel engine options in this segment from Citroen but the Puretech 1.2-litre three-cylinder turbo-petrol can be expected with around 110 hp and 205 Nm. This should pair with a six-speed manual or the EAT6 six-speed torque converter automatic. Lower-spec versions might even get the naturally aspirated 83 hp version of this engine.

The interiors of the upcoming Citroen C3 haven’t been seen yet, but they should carry the slightly quirky, layered dashboard and the deep-set instrumentation and eight-inch infotainment screen from the C5 Aircross. Some form of Citroen’s specially padded seats and the ‘hydraulic cushions’ for the suspension should be seen here as well. Other features should be in line with the segment with a sunroof, connected car tech, climate control, LED lighting and more.

Citroen India has confirmed that the first of its tailored-for-India C-Cubed offerings will debut this year. The model will make its global debut here before going on sale in the country and other parts of the world. This will be followed by more offerings based on the same architecture. As for pricing, the Citroen C3 can be expected to compete at the premium end of the sub-four-metre SUV segment and rival the Kia Sonet and Hyundai Venue, with prices expected to range from Rs 8 to 14 lakh (ex-showroom).

Bytedance CEO Zhang Yiming to step down from his position by the end of 2021- Technology News, Firstpost